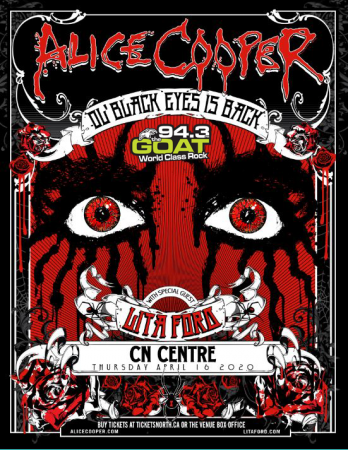 THIS SHOW IS POSTPONED UNTIL FURTHER NOTICE

Alice Cooper is one of rock ‘n roll’s supreme legends, and the CN Centre is thrilled to see him return. It is a long twelve years since Alice Cooper last played Prince George!

Alice Cooper pioneered a grandly theatrical brand of hard rock that was designed to shock. Drawing equally from horror movies, vaudeville, and garage rock, Alice Cooper created a stage show that featured electric chairs, guillotines, fake blood and boa constrictors. He continues to tour regularly, performing shows worldwide with the dark and horror-themed theatrics that he is best known for.

With a schedule that includes six months each year on the road, Alice Cooper brings his own brand of rock psycho-drama to fans both old and new, enjoying it as much as the audience does. Known as the architect of shock-rock, Cooper has rattled the cages and undermined the authority of generations of guardians of the status quo, continuing to surprise fans and exude danger at every turn.

Lita Ford’s career began in 1975 as a founding member and guitarist of the groundbreaking all-female group the Runaways. The group’s hard rock / punk edge spawned hits like “Cherry Bomb” and “Queens of Noise”. Lita and the Runaways proved their timelessness in 2014 when “Cherry Bomb” was featured in the critically acclaimed Marvel / Disney Studios hit movie “Guardians Of The Galaxy” and was nominated for a Grammy Award.

Lita Ford’s mega-hit “Kiss Me Deadly” was most recently featured in the blockbuster movie “Captain Marvel”. Through these films, Lita Ford has reached a new generation of passionate rock fans!