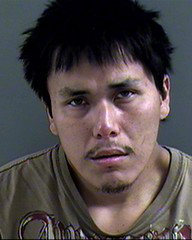 Prince George RCMP have put out an arrest warrant for an individual they suspect to have been involved in a January 8th robbery, as well as a February 5th Break and Enter.

The public is asked to be on the lookout for 27-year-old Brandon Michael Felix, described as:

The first incident took place in January at a convince store on the 1800 block of 20th Avenue. A lone male entered the store and took over $200 worth of merchandise.

The second crime took place on February 5th on the 600 block of Burden Street, when RCMP received a call reporting a Break and Enter. Several items were taken from the residence while a family of five were at home sleeping.

Following an investigation, RCMP now believe that Felix was responsible for both crimes and have issued an arrest warrant.

If seen, RCMP advises the public not to confront Felix as he should be considered violent, but instead to contact RCMP or Prince George Crime Stoppers.