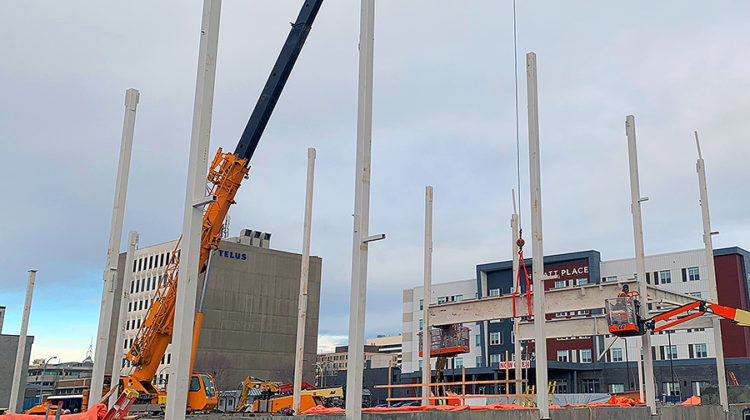 This morning, crews began installing large steel beams at the site near Dominion Street and between 7th and 6th Avenues. | City of PG

Local construction watchers will see the City of Prince George’s new downtown pool begin to take shape and rise into the air.

Roughly three to four dozen steel columns, some as long as 15 metres, will be erected at the site.

This phase of the operation will involve the construction of the pool’s mechanical rooms and penthouse level, as well as the change rooms.

The new facility will replace the Four Seasons Leisure Pool, located across 7th Avenue from the construction site.

The City anticipates that this period of the project will continue into the spring of 2021.

Following this stage, construction of the building envelope will begin.

Last month, crews with Chandos Construction finished the facility’s concrete building foundation, which was the first phase of the construction operation.

Traffic around this intersection is expected to experience varying levels of disruption to accommodate construction.

At various times, sections of Dominion Street between 7th Avenue and 6th Avenue, and parts of 7th Avenue between Dominion and Quebec Street will need to be closed and reduced to two-lane traffic in both directions.