Gauthier has save of the night as Cougars override the Chiefs 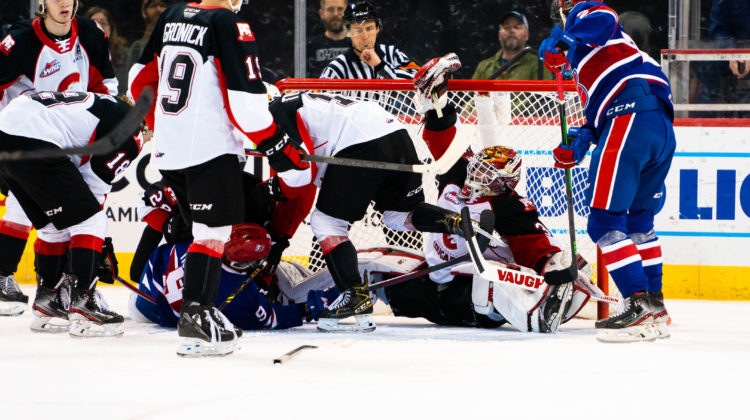 The Prince George Cougars have a win in the U.S.

After dropping games earlier in the week at Seattle (3-1) and at Portland (6-2), the Cougars rallied to beat the Chiefs 4-2 Friday night before 3,511 fans in Spokane.

Goalie Taylor Gauthier and the Cougars much maligned power-play played a key role in the victory.

It was the first time this season that Prince George won a game after trailing following the first period.

(They had been 0-7 in that situation)

The Cougars won for just the second time in nine games by overcoming a 2-1 deficit after 20 minutes.

Prince George scored twice in the second period and added an insurance goal in the 3rd.

First-star Hudson Thornton, second-star Connor Bowie and Carter MacAdams each notched a goal and an assist for the Cats.

Bowie scored the winner at 13:15 of the second.

Jonny Hooker tallied with the man advantage for the Cougars, who went 2/6 on the power-play while the Chiefs were 1/3.

The Cougars went into the game just 12 % on the power-play.

Prince George is 7th in the Western Conference standings, 3 points in front of Spokane and Victoria and five ahead of Tri-City.

Sometimes it’s not about the final scores, it’s about the friends you make along the way.#WHLScores pic.twitter.com/vcZ9OAPjX1