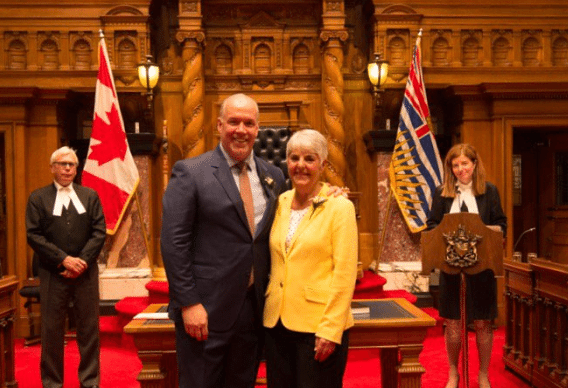 Finance Minister Carole James touted BC’s strong economy this morning as she discussed the release of the province’s public accounts.

The accounts, she was quick to point out, reflect the Liberal government’s management of BC.

Growth is higher than expected but James does have some reservations

“I believe that the public accounts also point to a real lack of a balanced approach to the economy and the importance of investing in the very people who helped build this strong economy: hard-working British Columbians, entrepreneurs, businesses who invest in our province.”

To change course, James says her government will invest in affordability and service improvements while working toward a sustainable economy.

That surplus sits at $2.7 billion dollars – a considerable sum but one James says doesn’t really reflect reality for many British Columbians.

“It’s really tough for people out there to see the benefit of a surplus this size when they’re struggling day today to manage when you take a look at the poverty rates in our province; when you look at seniors who can’t find the care that they need; when you see low and middle-income families who can’t find quality child care or businesses who can’t find employees because their employees can’t afford to live in the community that they’re working in.”

Affordability appears to be a top priority for the province, which could be tricky, considering much of the money flowing into the government comes from red-hot real estate markets in the Lower Mainland. James says relying on real estate speculation isn’t a good economic strategy and the NDP government will look to “long term, sustainable strategies.”

James says she is “very cautious” about BC’s finances going forward and says the government will be targeting its investments carefully in order to achieve its stated goals.

She promised to deliver a balanced budget on September 11. The cost of fighting BC’s wildfires, the state of ICBC, softwood lumber tariffs and the renegotiation of NAFTA are considered ‘budgetary concerns’ by the government.