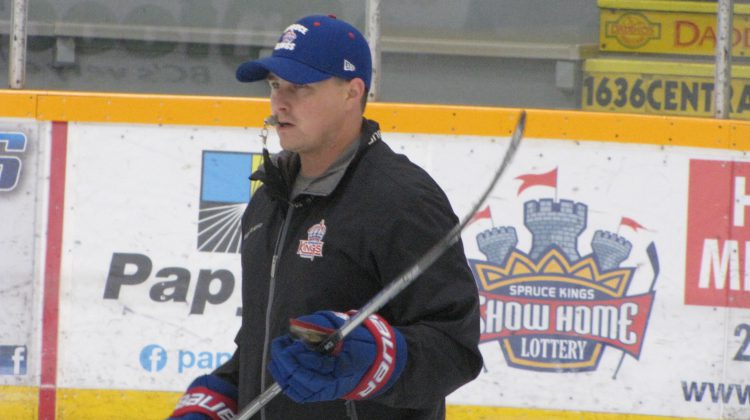 A good start at the National Junior A Hockey Championship can’t guarantee you the top prize but a bad start can certainly sink you.

That’s what the Prince George Spruce Kings are looking to avoid as they play their opening game of the tournament this afternoon (Sunday) in Brooks, Alberta against the Oakville Blades.

Oakville lost its opener in the five-team round robin 7-3 against the host Brooks Bandits on Saturday night.

Prince George is coming into the tournament on a high note defeating the tournament host Bandits in six games to claim the BCHL club’s first ever Doyle Cup in addition to the team’s first ever Fred Page Cup back in April when they swept the Vernon Vipers.

You could say the Spruce Kings did it the hard way even though they were already guaranteed a spot at nationals along with Brooks as they did not have the services of a pair top six defencemen in Liam Watson Brawn and Jay Keranan (he got hurt after game two of Doyle Cup).

Head Coach Adam Maglio had some reservations at first how they would respond to having five defencemen but is excited to have a full complement of blueliners available for the tournament.

The Spruce Kings bench boss isn’t taking anything for granted at nationals with just a four-game round robin, it’s paramount the most northern team in the BCHL keeps in line with what made them successful and to not take their foot off the gas pedal.

“I think once you get up to the pace of the game and knowing a little bit more about that team but we need to be ready for this because time is not on your hands here in these short tournaments.”

With not a lot of time to prepare for a team like Oakville that is said to be fast and highly skilled film study is paramount this time of year when game planning against an unfamiliar opponent.

“Video helps for sure, it helps your own game and it also finds out a lot of tendencies about the opposition that you haven’t seen as much but once you get playing live it is different.”

While a lot of the press centres around star players like Dustin Manz, Patrick Cozzi, Layton Ahac and Ben Poisson – Maglio was quick to point out the energy line of Fin Williams, Sean Donaldson along with either Craig MacDonald, Nick Wilson or Tyler Schleppe has provided a necessary spark at times to help change the momentum.

“We out value and emphasis on things outside of the scoresheet so you’re exactly right they certainly do a lot of little things throughout the whole playoffs for us which sends the next line out for success.”

Puck drop for the Spruce Kings opening game against the Central-representative Blades is set for 1 pm Pacific Time at Centennial Regional Arena.