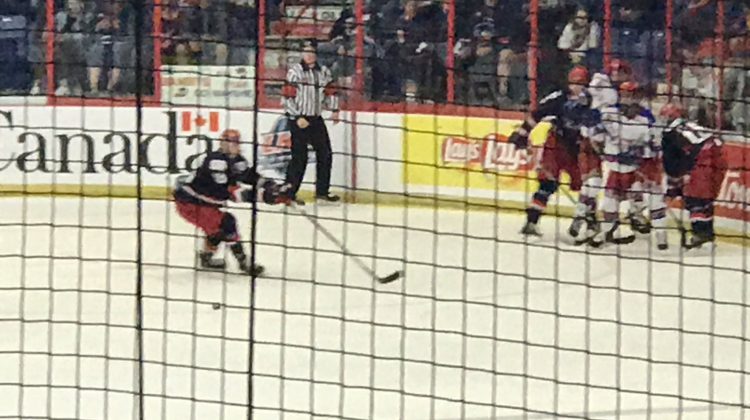 If you want to be the best, you’ll have to beat the best.

This is a lesson the Oakville Blades may find out the hardway at the National Junior A Hockey Championship in Brooks, Alberta.

After dropping their tournament opener 7-3 on Saturday against the Brooks Bandits, the Blades face another stiff test in the Prince George Spruce Kings who are the reigning Doyle Cup and Fred Page Cup Champions.

In an interview with MyPGNow, Blades Head Coach Mike Tarantino said his team will need to recover quickly against a Spruce Kings team that has made a lot of opponents look less than stellar.

“Prince George is going to be a real good challenge on short rest for us and in the first game for them but the idea here is to be the best team at the end of the tournament not in the beginning, we’ll look to continue that in this tournament.”

The Spruce Kings are probably riding the biggest wave of momentum going into the NJAC after dumping the host Bandits in six games, winning the last three in a row on home ice to claim the franchise’s first ever Doyle Cup.

Tarantino knows Prince George is built from the backend out and his forward group will need to find a way to generate offense.

“They’re very good defensively, they have a great core along with the goalie. I don’t think they are as offensively gifted as the Brooks team we just played but they are a quality hockey team that is well coached with good structure.”

Puck drop for the game is at 1pm Pacific from the Centnnial Regional Arena.