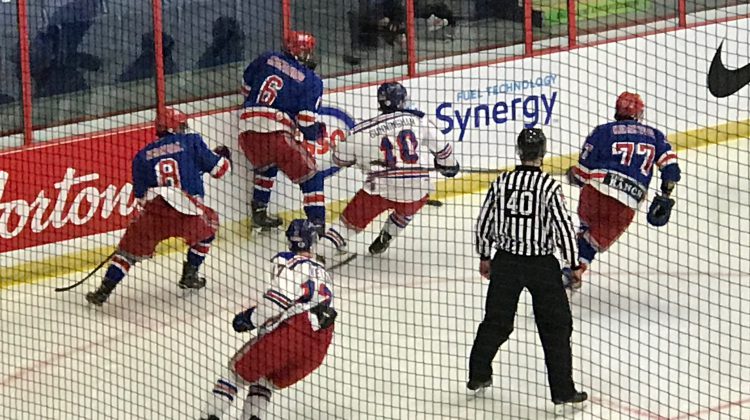 It did not take long for the Prince George Spruce Kings to look like themselves at the National Junior A Hockey Championship in Brooks, Alberta.

The Doyle Cup and Fred Page Cup Champions exploded for three goals in the second period to ensure a 5-1 victory over the Oakville Blades on Sunday from the Centennial Regional Arena.

“We knew they played in the late game last night so we knew they were not going to be fresh and we just wanted to be hard on the puck and get them deep in order to beat them. We had a little bit of nerves coming in for sure but aside from that we did a good job in competing harder after the first period and had a lot more to give at the end,” said Dylan Anhorn post game with MYPGNOW.

After Peyton Reeves broke open the scoring for the Blades in the first period, Ben Poisson, Chong Min Lee and, Patrick Cozzi led the offensive charge in the middle frame where the Spruce Kings outshot the Blades 20-3 in the second period.

“I don’t want to use the feeling out process as an excuse, if you stick to your game and play it you should be fine and we got back to that in the second and third and I thought that gave us the edge at the end of the game,” added Adam Maglio, Spruce Kings Head Coach.

Both Liam Watson-Brawn and Jay Keranen returned to man the Spruce Kings blueline after being out with injury.

Keranen and Nick Poisson added a singles in the third period. Shots on goal were 40-21 for the Spruce Kings.

Prince George went 2-for-6 on the power-play while Oakville went 1-for-5 and now drop to 0-2 in the round robin.

“Oakville was pretty passive on the penalty kill so we seem to do well when teams play that way against us, that allows us to move the puck around and create chances – we certainly buried on our chances today,” explained Cozzi.

Prince George improves to 1-0 at Nationals and will play the 1-0 Ottawa Junior Senators on Monday at 7pm.

Brendan Pawliw of MYPGNOW will be providing extensive coverage of the tournament from Alberta.

In the night cap, the host Brooks Bandits scored four unanswered goals to beat the Portage Terriers by a 5-3 score.

Simon Gravel scored a pair of goals for the Bandits while Randy Hernandez added a pair of assists.

Sam Huston recorded a pair of assists in defeat for the Terriers who drop to 0-2 at the NJAC.

At the end of Day 2, the tournament standings look like this:

Reece Henry scores in defeat for @PortageTerriers who fall 5-3 to @BrooksBandits and drop to 0-2 at @HC_NJAC #NJAC #cityofpg #sports pic.twitter.com/dxTaIZ4EaJ