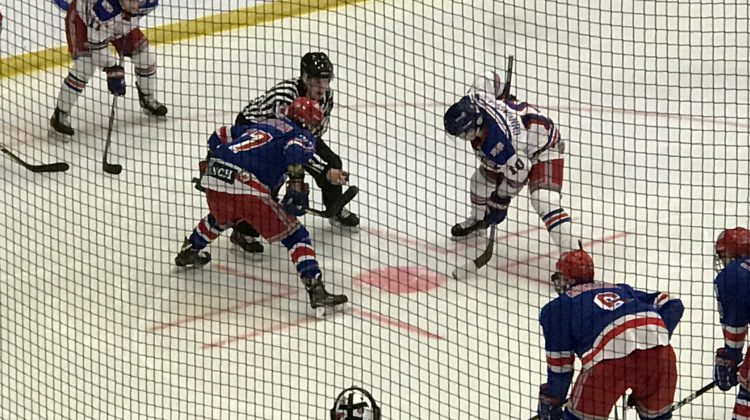 Even though the Prince George Spruce Kings got off to a solid start at the National Junior A Championship you wouldn’t know it based on the team’s focused approach.

Less than 24 hours after disptaching the Oakville Blades 5-1 on Sunday, the Doyle Cup champions are back in action today against the Ottawa Junior Senators as the Spruce Kings look to get off to a 2-0 start.

“They are a bit of a bigger team and a heavier one than Oakville, I think we have to use our speed against them for sure and we have to keep it in the offensive zone as I think that is when we are at our best is when we are posessing the puck, not forcing it, managing it and were going to focus more on our game and not so much on Ottawa,” said Adam Maglio, Spruce Kings Head Coach.

Spruce Kings captain Ben Poisson is in agreement with his head coach that the Senators do pose a similar challenge to the smaller, quicker Blades team they just beat in their tournament opener.

“Ottawa is a similar team to them they just are a little bigger and stronger so I think we should out compete them and things should work out well.”

Enjoying some form of homecooking so far in southern Alberta is veteran Prince George defenceman Dylan Anhorn who got off to a strong start with a rock-solid performance in the win over Oakville.

He adds it is always nice to play in front of a few more familiar faces than he otherwise would.

“Yeah absolutley, it is a pretty short drive from Calgary for the people who want to come down and watch who can’t usually since I am in Prince George. Personally it is really special and obviously it’s a great opportunity for our team.”

Puck drop is at 6pm Pacific Time from the Cetennial Regional Arena in Brooks, Alberta.