Spruce Kings blow past Ottawa, improve to 2-0 at Nationals 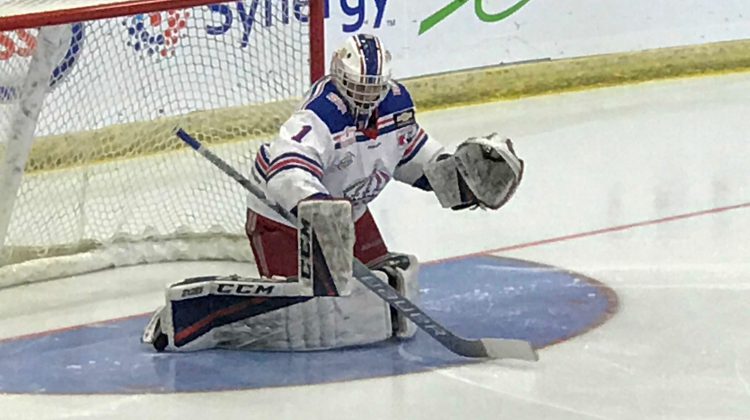 A word to the wise, don’t give the Prince George Spruce Kings chances to score.

The Ottawa Junior Senators found that out the hardway on Monday at the National Junior A Hockey Championship in Brooks, Alberta.

Prince George coasted to a 4-0 win to improve to 2-0 during round robin play where they went 1-for-4 on the man advantage.

Nick Poisson and Nick Bochen lit the lamp in the opening period giving the visitors a 2-0 edge after 20 minutes of play.

Head Coach Adam Maglio caught up with MYPGNOW post game and felt even though they won by the same margin of goals on Sunday, tonight’s effort was much more reflective what the team is capable of.

“I didn’t think last night we defended hard enough, I thought tonight we were better. It is the way we need to play to have success and I think we just built off the regular season and playoffs and we just stuck to our game.”

The Spruce Kings continued to solve Junior Sens goaltender Francis Boisvert in the middle frame as Ben Brar one-time a hard pass from Patrick Cozzi into the yawning cage, which was then capped off by a quick back hand goal from Dustin Manz.

“We were really clicking all over the ice and it just kind of came easy for us tonight as we just kept it simple on the boards and that really helped,” said Manz.

Logan Neaton on the other hand was again a lot less busy in the Spruce Kings net stopping all thirteen shots he faced.

Shots on goal were 29-13 for Prince George, they have given up a combined 34 shots in the first two games they have played.

“We know that we need to be more defensive especially when you get to a much harder team like Brooks in either semi’s or finals, we’ve just gotta prepare for that and that’s what we’ve been doing,” added Manz.

Prince George (2-0) is off tomorrow (Tuesday) before continuing action on Wednesday against the Portage Terriers (0-2).