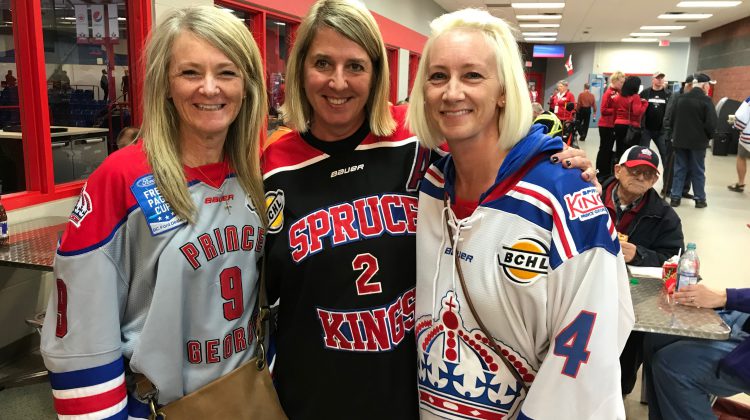 To some, the National Junior A Hockey Championship means the world to the players on the ice as well as the five teams participating wanting the opportunity to call themselves the best in Canada.

However, it’s an equally special time for the hockey parents who made the trek this week to Brooks, Alberta to watch their sons play the game they love.

This couldn’t be more true for a trio of mothers who are pulling for the Prince George Spruce Kings in Joni Manz (Dustin Manz’s mom) Karen Koziki (mother to Layton Ahac) and Kathie Anhorn (Dylan Anhorn’s Mom).

The Spruce Kings are in the midst of fairytale season where they have already collected the BCHL’s Fred Page Cup title (the team’s first since joining the BCHL) along with the franchise’s first-ever Doyle Cup, which they collected on home ice against the host and top-rated Brooks Bandits.

Manz told MYPGNOW it’s a surreal experience to come watch Dustin play at the highest level in person as seeing every home game in Prince George is a little bit difficult being from Michigan.

“I love watching him play, it’s way more fun in person and it’s great to see him after the game and chit chat – he loves to have us here and we love being here with him.”

Manz along with a good chunk of parents soaked up the experience of the watching the Spruce Kings hoist the Fred Page Cup in Vernon – a memory that won’t soon go away.

“That was a lot of fun just to see the excitement on the boys faces and the excitement of the people and parents who were there, that was so much fun and then the Doyle Cup we watched at home on TV and we were fortunate enough that some of the billet parents went and filled in for us and took all the pictures and posed with them with the cup.”

For Koziki, she agrees with Manz there is no bigger thrill than to see your son succeed at the highest level.

“Oh my gosh, it was fantastic. We live in the Lower Mainland so we come out to all those games as well as a few in PG but to see them raise the Doyle Cup on home ice is something I can’t describe. It was amazing to the fans and billet parents on the ice there was probably 200 people on the ice. I am so proud.”

“To see your son pursue his passion and his love for the sport and exude this energy is something you can’t put a price on it.”

The NJAC is a little bit of a homecoming for the Anhorn’s being just a two-hour jaunt from their hometown in Calgary.

“I am a little torn being from Alberta and watching your son play for BC but our kid Dylan has had a fantastic time and it’s a really good, hardworking association and we’re glad to be a part of it.”

Like most of the other parents, Anhorn couldn’t hold her excitement during the Doyle Cup.

“It was so fun watching it on TV listening to the broadcasts with everyone together and we’re listening to the excitement. It’s really fun because we are texting all the moms of the players and the families and it’s a really close-knit group.”

“We know that in Alberta, Brooks is a top-notch organization and a strong team so this is quite an accomplishment for PG and it’s so exciting to be here.”