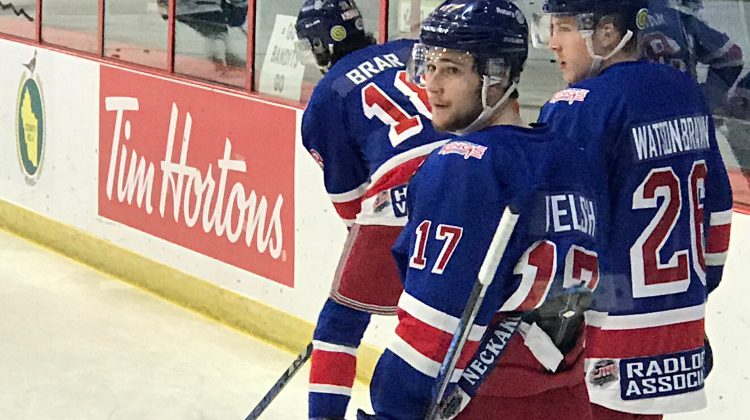 Even though it was a meaningless game in the standings, the Prince George Spruce Kings showed no mercy against the Portage Terriers cruising to a 5-1 victory.

The Doyle Cup champions needed just 53 seconds to light the lamp as Dylan Anhorn got the party started for the Spruce Kings who took a 3-0 lead after 20 minutes at the National Junior A Championship on Wednesday.

Prince George’s relentless forecheck resulted in singles for Ben Brar and Chong Min Lee who made life difficult for Terriers goaltender Nathan Moore who saw his team get outshot 20-3 after the first period.

“We have figured out we need to start the game on time after a rough first game against Oakville and play for the team and to not be selfish and I think that is working – that is why we are successful.”

Lee is enjoying a coming out party of sorts offensively where he has collected two goals and two helpers and is second on the Spruce Kings in scoring only behind teammate Brar.

“I love to play with the Poisson brothers, they are awesome. I like to make the passes and see myself as a playmaker because Benny and Nicky are good shooters so we have a lot of good chemistry going on.”

Nolan Welsh added a single in the middle frame to increase the PG lead to 4-0.

Keenan Rancier came on in relief of Logan Neaton after the first frame where both goalies combined to make nine saves.

Braden Billaney scored in defeat for the Terriers who finish the tournament 0-4.

Nick Poisson added his third of the NJAC late in the third period.

“I think I have been really going to the net this tournament where I have been finding pucks. That pass by Chong reached my stick and I think the bounces are going my way and I look to keep it going.”

“It’s fun to do it on the national stage, it’s something you dream about as a kid playing in front of lots of people and scouts so you want to be good, it’s lots of fun to score goals so it’s something fun to say that you scored at the national championships is something pretty cool for me to say.”

PG outshot Portage 44-10 overall as the Spruce Kings went 1-for-8 on the power-play.

The Spruce Kings improve to 3-0 in the round-robin and will wrap up that portion of the tournament tomorrow night against the host Brooks Bandits at 6 PM from the Centennial Regional Arena, the winner will have choice on what time they play during the semi-finals on Saturday.

.@SpruceKings Forward Nick Poisson scored his 3rd goal of the @HC_NJAC on Wednesday during a 5-1 victory over @PortageTerriers #cityofpg #sports #NJAC pic.twitter.com/sapP7JkUWh

MYPGNOW’s Brendan Pawliw is providing extensive coverage of the National Junior A Championship from Brooks, Alberta.