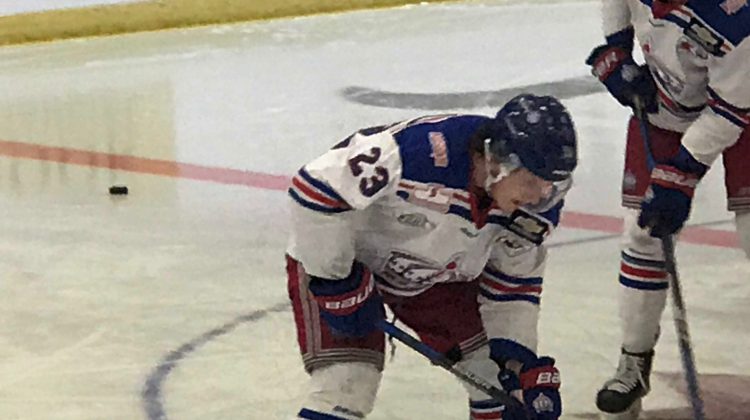 In the case of Craig MacDonald it’s better late than never.

The 19-year-old forward from Prince George has found a way to carve out a role with the Spruce Kings at the National Junior A Championship in Brooks, Alberta.

MacDonald is playing on the fourth line with fellow rookie forwards Sean Donaldson and Fin Williams who have provided a much-needed spark for the Fred Page and Doyle Cup champions providing an element of grit as well as the odd scoring chance.

“I have just bought into the system and prepare for what is to come and that is how you get into the lineup. I have learned a lot about nutrition over the course of the year as well as stretching because once you are in the lineup you can’t take it for granted. You’ve got to be good at what you do and just have to keep going,” said MacDonald.

After enjoying some moderate success at the BC Major Midget League level with the Cariboo Cougars where he collected 51 points in the 39 games during the 2017-18 regular season, MacDonald’s initial sojourn into the Junior A ranks has been met with a few more challenges tallying three points in 44 games and not seeing any postseason action until the Doyle Cup.

Through it all, the local product kept a positive mindset while waiting for his next chance.

“I was just going to the gym getting my legs ready and just getting prepared for that time and once it go to that point I could stay in the lineup and contribute in ways that I can and play the right way by doing the little things to stay in.”

MacDonald admits some adjustments took a little longer than others.

“It is an adjustment coming from midget and to go to junior it is just a whole different step and you have to prepare and be ready for your time because once it is your time you can’t take it for granted you just have to do what you can to stay.”

The 19-year-old states it means the world to him to be on the national stage with his teammates along with childhood friend Corey Cunningham.

“It means everything honestly. The amount of people I have grown up playing hockey with never got this opportunity so it means a lot, it’s one hell of a ride that has been a lot of fun and you learn a lot through all the battles and all the games as well as the practices,” added MacDonald.

Prince George (3-1) plays the Oakville Blades (2-2) in one of the two semi-finals at 6pm on Saturday from the Centennial Regional Arena.

MYPGNOW’s Brendan Pawliw is in Brooks, Alberta providing extensive coverage of the National Junior A Championship.