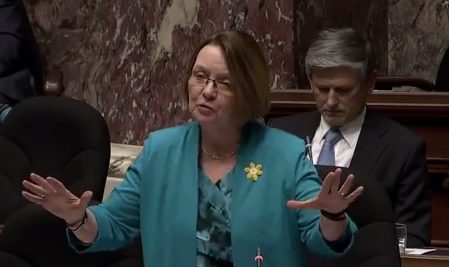 (supplied by BC Government)

“Because these are lifesaving devices, we need to make sure that we close those gaps,” Prince George-Valemount MLA Shirley Bond told MyPGNow.

While some public facilities have defibrillators, there are no provincial requirements to have them registered and maintained with any governing body, let alone even have them in the first place.

Bond introduced her private members’ bill this week, with the legislation designed to make sure that AED’s are both registered and working. Proper signage will also be required to indicate where exactly AED’s are located. It’s a patchwork of situations according to Bond.

“I think every member of the house understands the value of AED’s,” said Bond. “Whether or not the government believes that legislation to make this mandatory is necessary or not, time will tell. But I’m not going to give up.”

Today I introduced a Private Members Bill that would increase public access to life saving Automated External Defibrillators or AEDs.

Cardiac arrest can happen to anyone, anywhere. CPR combined with an AED increases survival rates by 75%https://t.co/qdy11CbHYr @HeartandStroke pic.twitter.com/17ee90H0XI

“Currently there is a significant gap in British Columbia. There may well be AED’s in a number of places but there are no guarantees that they are maintained, or that they are registered.”

The legislation, if passed, will create a list of places that would require defibrillators, which would be left up to the government to determine.

This would be a mandatory requirement that places such as schools, arenas, gymnasiums, and airports have an AED. Not only that but also the requirement of having them all properly registered and maintained.

Registration of defibrillators would allow 9-1-1 to provide that information both to paramedics, first responders, as well as the general public, which could drastically increase the chance of survival in the event of a cardiac arrest.

According to the Heart and Stroke Foundation, the combination of CPR and the use of an AED improves survival rates by 75 per cent.

“We’re going to continue to raise this issue over the coming months,” said Bond. “I’ve spent a lot of time working with Heart and Stroke, hearing from people from across the province whose families have been impacted by a cardiac arrest including my own family, and it’s time to try to make a more systematic approach to the availability of these AED’s.”

Promising to stand her ground on the issue following the tabling of her bill, Bond says she will continue to work with the Canadian Heart and Stroke Foundation, which includes participating in riding the Big Bike in Prince George today (Friday), which Team Bond has been an active participant in.