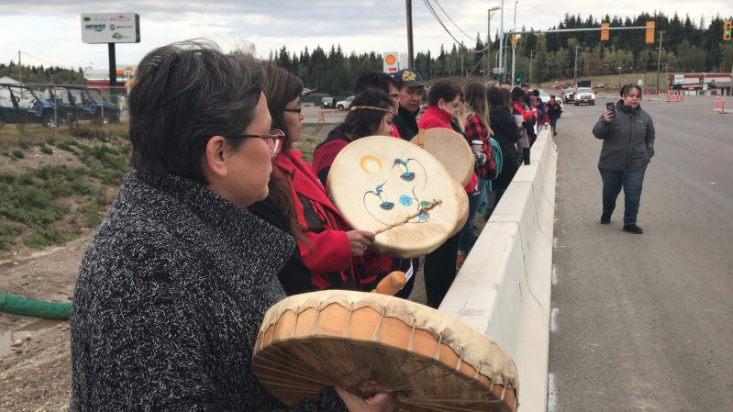 People line up along Highway 16 west of Prince George in honour of Jessica Patrick | Kyle Balzer, My PG Now

Following the release of the final report on Missing and Murdered Indigenous Women and Girls (MMIWG), Indigenous people throughout Canada are calling for real action on the report’s recommendations.

The report, nearly three years in the making, has 231 calls for justice, including a complete overhaul of the way police handle these cases.

Chief Na’ mocks, a Hereditary Chief the Wet’suwet’en, said if these were non-indigenous people it might be a different story.

“If this was the daughter of a Premier or the daughter of the Prime Mister this would be a manhunt across this country and yet with our people, it seems to be just another statistic.”

Na’ mocks’ fears the report will be looked at and then put on a shelf with no real action.

Kukpi7 Judy Wilson, Secretary-Treasurer of the Union of BC Indian Chiefs said ways to start addressing the issue is providing safe and accessible housing, transportation, and services for Indigenous women, girls, and Two-Spirit people.

The report refers to what’s happening as a “genocide of indigenous people,” and refers to the need to educate different levels of government, service providers and public influencers, like media, about this history.

“We have always known this was a genocide; an Indigenous femicide. The violence we face happens in all aspects of our lives — at every level, in every institution, in every interaction,” said Sophie Merasty, sister of Rose Merasty and member of the Downtown Eastside Women’s Centre.

“The fact is there are human beings that are murdered and are missing. It’s women, girls two-spirited people and the human aspect of it has been overlooked,” said Na’ mocks.

Na’ mocks hopes that when the government and people look at the inquiry, they remember it’s not just about numbers, it’s about human beings.