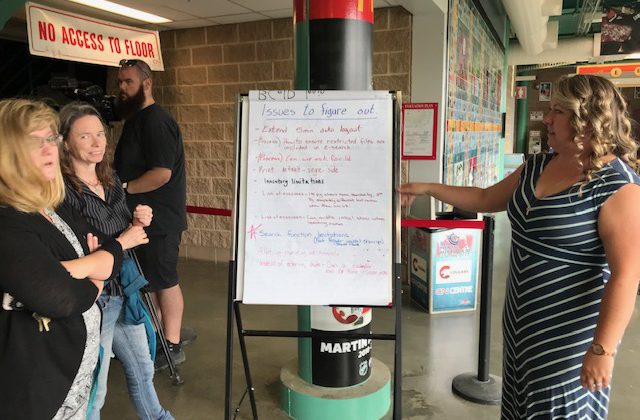 After 14,000 wildfire evacuees came to the northern capital over the past two summers, the city is switching to a digital system to register those needing emergency services.

Today (Thurs) at the CN Centre, they were training upwards of 250 staff and other personnel on the new system, which registers people online.

Over the last two years, all of the evacuees were registering for supports such as food and accommodation by using a paper-based system provided by the province.

Adam Davey, Manager of Emergency Programs for the city, said the digital system will reduce the time needed to register evacuees and decrease the number of staff and volunteers required at the Emergency Reception Centre.

“Now we’re taking it from what might have been 80 minutes of staff and paperwork time to about 20, that’s what we are testing today.”

“So far the news has been excellent and the system has been working very well.”

Emergency Management BC has developed the online system and is working with four local governments; the City of Kamloops, the Regional District of Central Okanagan, T’Kemloops First Nation and the City of Prince George, but the northern capital is the first to test it out.