Trio of Cougars receive invite to Canada’s National U17 camp 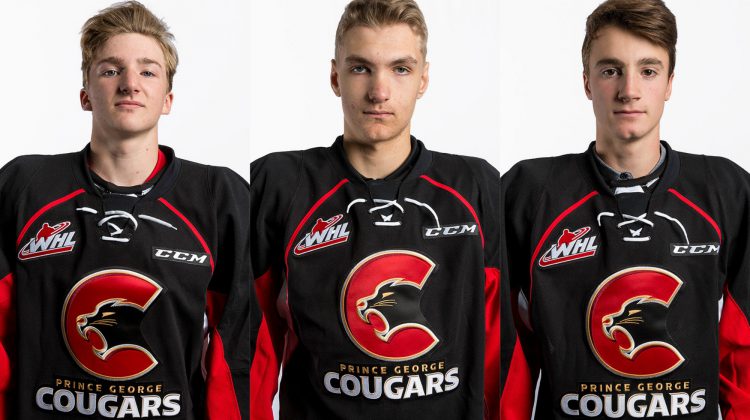 It’s one step closer to being given the opportunity to dawn the maple leaf on their chest.

A trio of Prince George Cougars has received invitations to Hockey Canada’s national under-17 development camp.

Forward Craig Armstrong, defenceman Hudson Thornton, and goaltender Tyler Brennan are among the 112 players invited to the week-long camp, which takes place July 19-26 in Calgary. The invitees will be split into six teams for on and off-ice training, fitness testing, intrasquad games, and classroom studies.

Armstrong was the Cougars’ first-pick, ninth overall, in the 2018 Western Hockey League (WHL) Bantam Draft. This past season he played at the midget prep level with the Edge School Mountaineers in the Canadian Sport School Hockey League (CSSHL). The Airdrie, Alberta product amassed 12 goals and 16 assists for 28 points in 29 games. Armstrong played in five games last season with the Cougars, highlighted by his WHL debut on January 8 against the Kelowna Rockets. Armstrong won a bronze medal with Team Alberta at the 2019 Canada Winter Games in Red Deer, Alberta in February.

“The national under-17 development camp is the first step these athletes take in their Team Canada career,” said Shawn Bullock, director of men’s national teams. “Ultimately, these players will learn what it takes to wear the maple leaf in international competition.”

Brennan, the Cougars’ second pick, 21st overall, in the 2018 WHL Bantam Draft, played for the Winnipeg-based Rink Hockey Academy (RHA) in the Canadian Sport School Hockey League. Brennan played in 21 games for RHA at the midget prep level, posting a 12-5-1 record, to go along with a 2.69 GAA and a .909 SV%. He also had two shutouts. Brennan made his WHL debut on February 8th against the Rockets. The 6’2, 185-pound netminder also played at the Canada Winter Games in February, as he appeared in four games with Team Manitoba.

Thornton was the Cougars third-pick, 33rd overall, in the 2018 WHL Bantam Draft. The Winnipeg, Manitoba product played with Brennan on RHA’s midget prep team last season in the CSSHL. Thornton not only led his team in scoring, but he was the top scoring defenceman in the CSSHL, as he compiled 17 goals and 30 assists for 47 points in 31 games. He played on Team Manitoba at the Canada Winter Games as well, where he tallied five points in six games.

From the 112 players invited to the Under-17 Development Camp, 66 will be named to one of three Canadian teams competing at the 2019 World Under-17 Hockey Challenge.