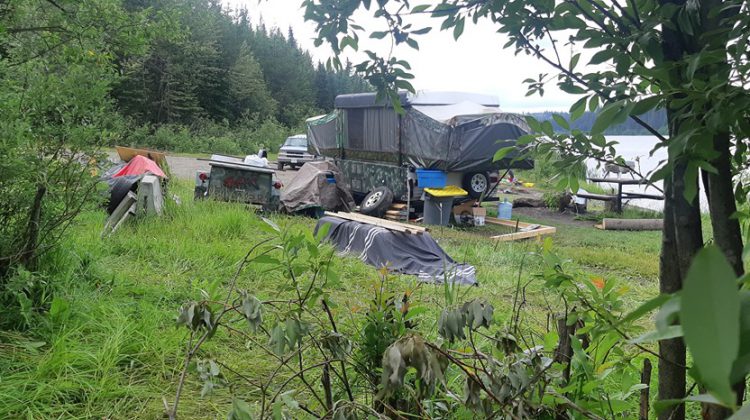 One user’s post on the STOLEN Prince George Facebook page has led to an investigation into a camp of stolen items outside of the city.

Local Tyler Frigon was out near Shesta Lake camping with his son and friends when he noticed some “interesting characters” in the area.

“I took my dog for a walk and started seeing some interesting things in the trees and I started taking pictures and looking around further,” he said.

He said the items he saw seemed like they were stolen.

“It made me quite angry so I wanted to do whatever I could about it,” Frigon posted the pictures first and then called the police, but initially called the wrong detachment.

Corporal Craig Douglass said an officer came upon the post on Sunday and recognized a stolen vehicle from the picture of the license plate.

“The officer went out there and the camp was vacant, but the truck and a tent trailer that was in the process of being painted were found.”

The Ford pick-up was confirmed stolen from Clear Lake Road on the morning of June 30th.

“There was another cargo type trailer that was also in the process of being painted. It was homemade so there was no serial number on it, but it was seized too because it is believed to be stolen,” said Douglass.

Frigon said he hadn’t expected people’s items to be returned when he made the post.

“Now that I know some people are getting their stuff back I actually feel quite good about it.”

Douglass said the discovery wouldn’t have happened without Frigon’s help.

“Good on the member on doing the due diligence. Today’s policing includes social media. Whether we use it on missing persons investigations or things like this where people posted something that leads us down a path, we use social media a lot in our investigations.”

“If you see something suspicious, report it to the police, as soon as possible. Give us as much information as you can, we wouldn’t ask you to put yourself at risk to take pictures, but if you have them you can send them to our detachment,” added Douglass.

The camp was vacant when RMCP arrived, no arrests have been made but the investigation is ongoing.