History has been made; first ever cannabis retail store in PG opened today 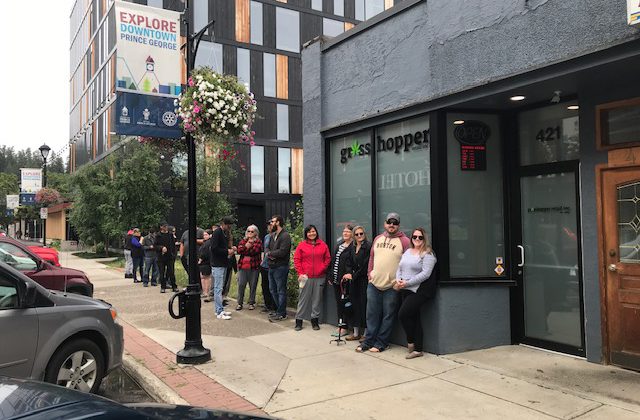 By 8:45 this morning, more than 20 people had lined up outside of 421 George Street, where the first store to legally sell cannabis in the Northern Capital opened its doors.

Grasshopper Retail Inc. is the first of the six stores that have been approved by City Council and the province to begin operating.

Those in line had a variety of reasons to be there, and for one woman, it’s been a long time coming.

“I’ve been waiting 35 years for this. I need it for medicinal purposes, and it’s the only medication I will use. It’s the best thing in the world. I never thought I’d live to see it and I’m so excited that I can.”

Just a few people down in line, another waiting customer was just as excited but said he uses cannabis mainly recreationally.

“It’s just like alcohol, except safer I think. It was legalized in October, and it feels like we’ve waited twice as long as other provinces to have this opportunity, but it’s great that Prince George, BC’s Northern Capital, is one of the biggest cannabis places and it’s finally here. ”

The very first customers in line on Grasshopper’s opening day were two people from Mackenzie.

As for why they showed up this morning…

“Why not? It’s an exciting thing, it’s a great time to be alive, so might as well be first in line for it!”