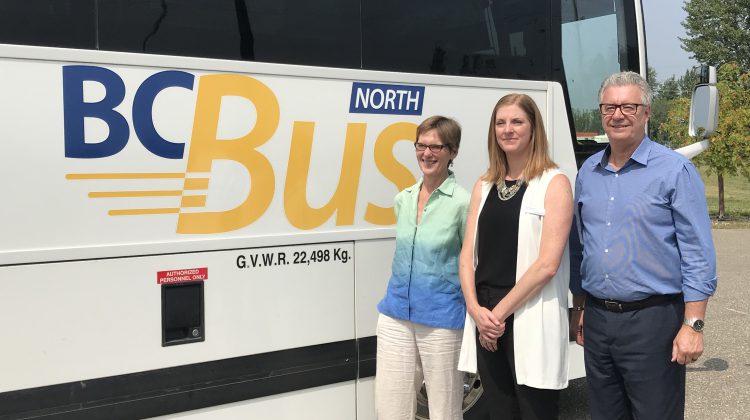 The proof is in the… routes.

While the competitive process has begun in bidding for routes currently serviced by BC Bus North, Transportation Minister Claire Trevena believes the government-installed temporary service has proven the need for inter-city transportation.

The Province of BC, along with the support of the federal government, has taken steps to ensure that people who live and work in Northern BC continue to have access to bus services since the sudden departure of Greyhound.

“We came in last year with BC Bus North because of Greyhound’s withdrawal of service, and we know how important it is to have safe and affordable ground transportation across Northern BC,” Minister Trevena told MyPGNow. “That’s why we came in immediately to provide service. We now want to ensure that we are doing it in the best and most transparent way possible, that we have the opportunity for companies to bid on the service so we can continue to provide bus service for the north.”

BC Transit, as directed by the Minister of Transportation and Infrastructure, is conducting a competitive process to extend northern inter-city bus services through March 31, 2021. The request for proposal (RFP) aims to select one or more qualified transportation providers to operate on the four routes currently serviced by BC Bus North.

With the proven success of BC Bus North, Trevena believes companies have been keeping tabs on the demand and performance ahead of the opening of this bidding process.

“I think there are big companies there that have been looking at the different routes. We’ve seen a company obviously working with the province to make sure those routes have been covered for the last year. We’re very pleased to have seen that happen so quickly, but I’m sure other companies have been interested.”

And while the release made by the Province regarding the competitive process indicates they’re looking for one or more companies to take on the four routes, Trevena stated that the ideal situation simply sees a continuation of these routes being services, regardless of how many companies it may take to do so.

“BC Bus North ahs proven that there’s a real demand for it, whether that’s people going to work, going to school, traveling to visit family, or simply going to another community. There seems to be a true need for it, so ensuring that there’s a provider, or providers, to complete those routes is essential.”

The RFP will remain open on BCBid until August 22, at 2:00 p.m. Respondents are being asked to state conditions that would lead to the inter-city transportation service to operate without government subsidies.

Due to the competitive process, Minister Trevena would not provide details regarding cost in operating the various routes but did indicate that the Government of Canada will deliver up to $10 million to support Western provinces following Greyhound’s decision to cease its operations.

“The Government of Canada is delighted to partner with the Province of British Columbia to provide safe transportation options for Canadians in Northern BC — especially for Indigenous women and girls,” said Marc Garneau, federal Minister of Transport. “This inter-city bus service will also provide economic opportunities for northern British Columbians.”

The BC government launched BC Bus North as a temporary solution on June 4, 2018, just days after Greyhound discontinued the majority of its northern bus routes.

Elsewhere in BC, private sector transportation providers are already actively servicing the majority of the routes vacated by Greyhound in 2018.