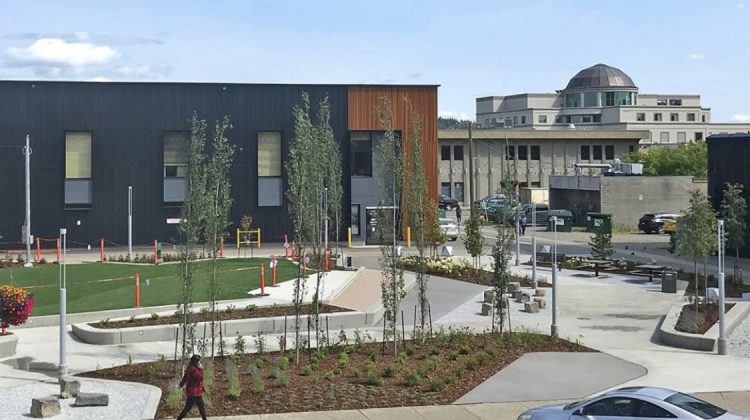 It’s the first new park in the city’s downtown since the creation of Canada Games Plaza, which accompanied the opening of the Prince George Conference and Civic Centre back in 1994.

“The new Wood Innovation Square will bring families, tourists and local residents together, support local arts and culture, and spur local economic development for years to come,” said Jinny Sims, Minister of Citizens’ Services. “Through partnerships like the one we have with the City of Prince George, we’re making life better for British Columbians and building strong, secure and resilient communities.”

The Wood Innovation Square is located on 5th Avenue, adjacent to both the Wood Innovation and Design Centre (WIDC) and the Wood Innovation Research Laboratory. With the area being designed for social interaction and events, the park is the equivalent of four city lots, all while featuring picnic tables, seating, paths, along with trees, flowers, and shrubs.

“Council is excited to see the continued development of downtown Prince George and this new park provides a dynamic, safe, and inviting urban space,” says Mayor Lyn Hall. “This square has been totally transformed and I would like to express thanks, on behalf of Council, to the Government of B.C., which provided much of the funding for this park when they established the Wood Innovation and Design Centre. This space is now a terrific complement to the WIDC, as well as the award-winning Wood Innovation Research Lab, and will help to tell the story of those buildings and the continued leadership of Prince George in wood innovation.”

The Province is contributing $750,000 towards the project and the City is providing approximately $650,000. Construction began last summer and was led by Viking Construction of Prince George. According to the City, it’s estimated that 20 local jobs were created as a result of the project.