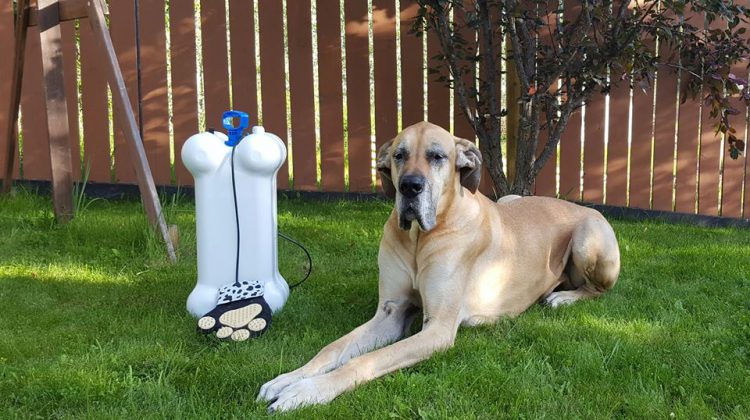 What started as an idea to better wash your four-legged friend has led a 150 Mile House man to secure a US utility patent.

Andrew Brown is hoping his portable washing station will be a hit with pet owners.

“My family we have great dane dogs. They really don’t like being in the bathtub, and then I got to thinking to myself you know there’s got to be something better, something that’s easier for pet and pet owner,” Brown said.

“You know wrestling a big dog like that into the bathtub one destroys your bathtub and it’s not a fun experience for pet or owner.”

The portable dog bone-shaped washer holds eight liters of water to wash your pet which according to Brown uses a fraction of the water that you would use with traditional measures of washing your pet in a bathtub or out in the backyard with a hose.

“When I first came up with the idea I had no idea what to do with it. So I started searching patents and I found a company in the UK that actually helps you write your own patent so I contacted them and being from the UK they were geared towards filing a patent in the UK, ” he said.

“So actually the first place I have a patent in is the United Kingdom and then just the sheer number of pet dogs in the US-there’s between 70 to 80 million, I figured that’s where the biggest market in the world is so that’s where I’m going to want to chase my protection.”

Brown added it was an expensive journey to undertake.

“Raising a family at the same time, I’ve been chipping away at it as funds would allow, ” he said.

“And then too from concept to a functioning working product that people would actually purchase there’s a lot more involved than meets the eye. There are designers involved, there’s engineers involved, a lot of times you do a lot of work and you find out in the end that it’s no good and you have to start over again from square one, so it’s not for the faint of heart trying to get a product to market because there’s definitely a lot of ups but there’s also a lot of downs in the whole process.”

“The production is starting this week regardless of the outcome of the Kickstarter campaign.”