Admins of removed Facebook page are frustrated by public perception 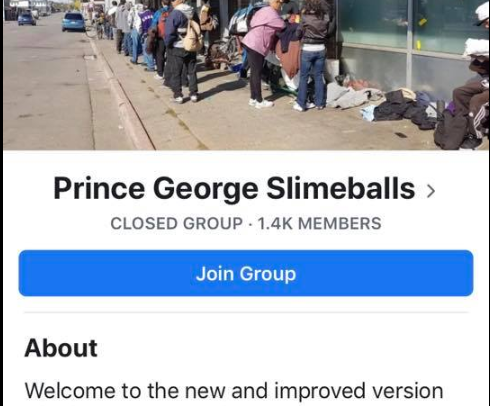 Moderators of a controversial Facebook page are saying that they don’t know who changed their cover photo and posted comments that led to the removal of the page.

This week, Prince George Slimeballs was removed by Facebook for violating the Community Standards of violence and incitement.

The page featured a photo of people lining up outside of St. Vincent De Paul, an organization that provides food for those in need, calling for ‘open season on junkies’ and saying ‘it’s time to break out the brass knuckles.’

The person who claims he originally created the page calls himself TJ Getty on Facebook and told MyPGNow that the group started as Prince George Thieves Exposed, which had strict rules against threats of violence.

“It was to expose people, like habitual criminals, that were going around breaking into people’s places and stealing stuff. When I set up my group rules, if you put up any posts threatening violence, you’re gone, no warning shot, you’re out of the group. I wasn’t putting up with any of that,” said Getty.

“I want to express my sincerest apologies to the community as a whole and especially to the less fortunate in our community that might have been the target of this vile hatred.”

Getty said he left the group because of family issues before it was changed to Prince George Slimeballs.

None of the three Facebook users listed as administrators could say who changed the page name, bio, or photo, including Sammi Seftel, who said her grandson has been sick, so she hasn’t had time to monitor the page.

“Yes I was an admin, but I have a life, and Facebook is not my life. People are unimpressed thinking I am this horrific person. You know, it’s so easy to assume, but you don’t always know.”

She said she’s frustrated with how she’s being perceived because of the page’s reputation now.

“Sometimes things aren’t as they seem, maybe getting facts about things before accusing or threatening would be the best course of action. I’m all about helping our community in every way possible,” said Seftel.

“I don’t condone any of those actions, I just want to be left alone.”

Another of the admin, who wished to remain anonymous, said she would like to distance herself from the group.

At the time of its removal, the group had 1400 members.