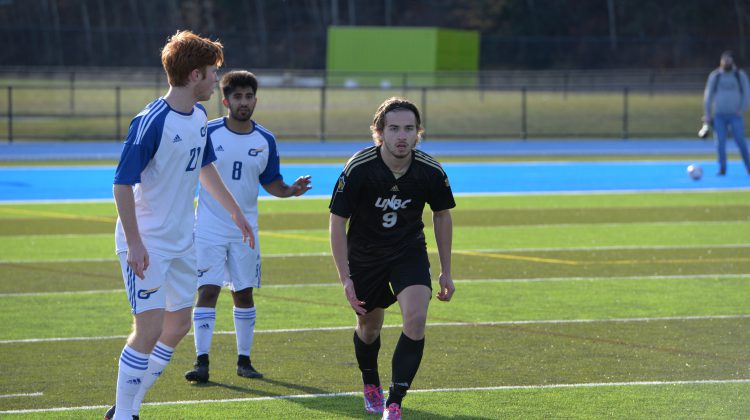 The UNBC Timberwolves men’s soccer team faced some early pressure but extinguished a one-goal deficit to come out on top.

A night after dropping a 2-1 decision to the UBCO Heat, the T-Wolves exacted revenge on Saturday winning by the same 2-1 score, earning a season opening split in Kelowna.

For the second consecutive night, UNBC fell behind early as Sam McDonald picked up another goal rippling the onion bag against goalkeeper Rob Goodey.

However, the Timberwolves refused to go away quietly as fourth-year local product Alex Nielsen scored his first career university goal in the 70th minute tying the game at 1-1.

Neilsen was over the moon about the milestone.

“It felt awesome. A great feed from Mikey (Henman). I think I scored on my second touch, that is what the coaches were telling me.”

“It feels awesome, and credit to the boys for getting me there.”

After a mad scramble deep inside UNBC territory, Hussein Behery sent a long ball over the head of UBCO goaltender Nicholas Reitsma, which found Micheal Henman who put the ball into the yawning cage in the 83rd minute giving the Timberwolves a 2-1 advantage.

“Hussein sent a great ball in, and it went way up in the air, so I just wanted to make sure I would direct it in.”

“I was screaming it felt so good. This group of guys is so special, it felt amazing in that moment to do something for them.”

UNBC was outshot 17-7 and were only awarded two corner kicks in the match, compared to the Heat’s 13.

The Timberwolves and Heat are now 1-1 on the season as UNBC prepares for its home opener on Friday against UFV (0-1) at 6pm from Masich Place Stadium.

“We are ready to go. We know UFV is good, and we won’t take them lightly,” said Henman. We know we are going to have a lot of support from our friends and family, and we are going to do our job.”