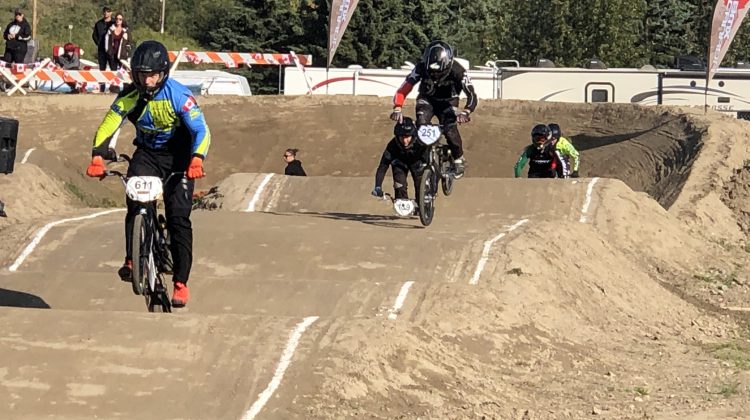 Riders race to the finish during a heat of the Northern Lights Nationals. (Ethan Ready, MyPGNow staff)

The event spanned across three days, getting kicked off on Friday.

BMX Canada holds five national events in the province each year, as well as one in Ontario.

According to Corrie Anderson, Supertrax President, the past year has seen nearly $200,000 put into the facility and its track.

“The track’s been here for around 40 years. There’s been a lot happening in the last two years. The track is a lot bigger and we put in a new start hill,” Angela Patterson, Supertrax Vice President told MyPGNow. “That really was a big push to get an event like this. I think now that we’ve got some people from out of town, I think we’ll get more events like this because we’re up to a level with the rest of the province now.”

The City of Prince George, as well as several local businesses,  chipped in and helped the club to cover expenses as they did a complete overhaul of the track.

Despite being an Olympic sport, BMX racing doesn’t get much attention compared to other sports, but as Patterson states, it’s a tight-knit community here in Prince George.

“It’s a family sport. It keeps us as a family doing something together. Everyone helps each other and is just happy to be here.”