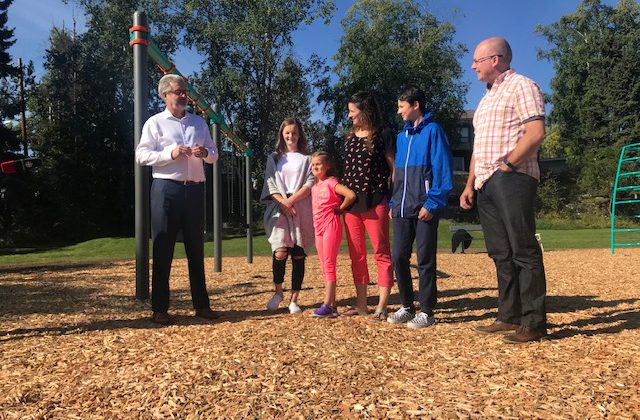 She may not have been able to see over the desk, but she was able to make a difference.

The park had been identified for replacement by the city and after speaking with Parks Supervisor Chris Bjorn, Brinley became a part of the design team.

“They took out the slide, and I really liked the slide. I went to City Hall and we made this brand new park,” she said.

Some of the additions she contributed to include extra swings, a “spinny thing,” and a zip line.

“Brinley went around to a few of our new City playgrounds and selected features that she liked the best,” said Bjorn. “The new Hammond Park playground is truly a reflection of what she wanted to see and I’m sure the neighbourhood children will agree she made some excellent choices!”

“We’re always saying come in and talk to the Mayor and tell us what you want to do, and there this seven year old was and she let us know what she wanted. The beauty of this job is you just don’t know what’s going to happen from day to day. When Brinley showed up to talk to us about the park and what we should be doing, I thought wow, she’s pretty knowledgeable.”

For Brinley, the park adds to the community.

“Now there are more people and not people inside their bedrooms playing on their electronics, and my brother likes playing too,” she said.

When asked, Brinley would not say whether or not she will be running for Mayor in the next election.