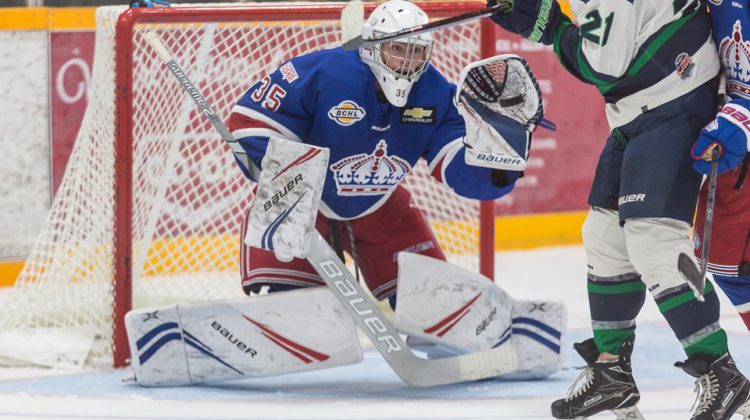 It was supposed to be a night of celebration for the Prince George Spruce Kings.

However, the Surrey Eagles got the memo.

Led by a 30-save effort from goaltender Thomas Scarfone, the Eagles crashed the Spruce Kings party on Friday night, skating away with a 4-2 victory in front of 1,239 fans at the Rolling Mix Concrete Arena.

After a 1-1 tie to conclude the opening period, Surrey took advantage of a solid middle frame receiving timely offense from Hudson Schandor along with a tip-in goal on the power-play from Carter King.

“Sometimes you don’t get good bounces and stuff doesn’t go your way and tonight they had a bounce or two that went their way and we didn’t get that at the end of the game when we needed it,” said Jett Alexander, Spruce Kings goaltender.

Fin Williams put the Spruce Kings ahead on the power-play in the first period sending the crowd at the RMCA into an early frenzy.

The defending champs are right back at it ?

Fin Williams, a @umichhockey commit, scores the first @SpruceKings goal of the season as they attempt to defend their crown pic.twitter.com/faRKbq43tk

The 16-year-old continued to show maturity beyond his years early in the third bringing Prince George within one after putting home a back-door pass from Nicholas Poisson on the man advantage for his second of the game.

Williams is one of a handful of players back from last year’s Fred Page Cup and Doyle Cup championship team that was one win from claiming the National Junior A Crown in Brooks, Alberta.

He admitted to MyPGNow.com after the game, the younger version of the Spruce Kings are still a work in progress.

“It’s a really new group but we have to be more consistent and play a full 60 minutes and get more of a group effort, I think we are learning right now and should get better as the year goes on.”

Alexander on the other hand suffered some bad luck in his first start between the pipes for Prince George where some weird bounces and a couple of bang-bang plays went against him.

“Obviously there goalie was better than I was and that can’t be the case at the end of the game, that kind of dictates it obviously.”

“The first goal was weird, I am not sure if it hit a stick but I misplayed it. The second one was a tip and the third one had a guy in the slot so you take your chances with that, I felt really good and competed hard and was on top of the puck but sometimes the bounces don’t go your way.”

Alexander admits the team will go through some growing pains early in the season as they build up chemistry on the ice.

“We’ve been a group for two to three weeks now and it’s tough, I am not sure how many guys came back but we have to keep building from the foundation up here. I think everyone is gelling well and I think the chemistry will come, it’s game number one of junior hockey for a lot of guys so it’s a big adjustment having that crowd and is something they’ll have to get used to.”

20-year-old defenceman Sol Seibel who was acquired by the Spruce Kings from the Salmon Arm Silverbacks had a rough debut after being credited with four minor penalties plus a ten-minute misconduct that was served by rookie forward Tom Richter.

The Spruce Kings outshot the Eagles 33-32.

Both teams play again tonight (Saturday) at 7pm from the RMCA.

FINAL: We drop the opening game by a 4-2 score. Fin Williams the lone goal scorer for the Kings in the final frame.

We meet again tomorrow night right here at the RMCA.