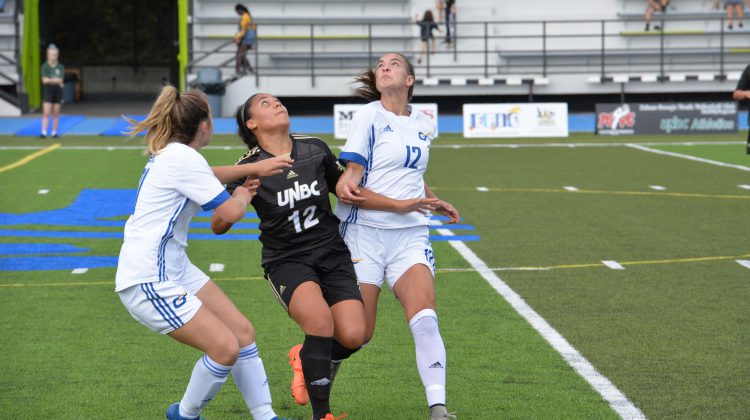 Less than a year after scoring the game-winning goal against the Heat to get the UNBC Timberwolves into the Canada West women’s soccer playoffs, the San Francisco, California product scored two more times against them on Saturday enroute to a 3-0 victory from Masich Place Stadium.

With the win, UNBC improves to 2-0 on the young season and Jones believes the team is starting to click in all phases of the game after spending the last couples seasons learning how to play together.

“A lot of the first year players have stepped up and added to our team this year, practices are always intense and everyone is happy to be here and I really think that makes a difference.”

“My teammates just played me some amazing balls tonight like when Paige (Payne) found me right in front of the goal I had to score otherwise I think Paige would have been a little sad.”

POSTGAME: @unbc‘s Sofia Jones had a pair of goals, and talked about @UNBCWSoccer‘s efforts in a 3-0 victory over the @UBCOHeat! Watch! pic.twitter.com/mKV21XDdQL

Speaking of Payne, the win was extra-special as with an assist today she became the career points leader at UNBC with 18 surpassing Sydney Roy.

The effort was capped off by an insurance marker from freshman Claire Turner who finished a great individual effort from Julia Babicz.

“It felt rewarding after a long pre-season of hard work and practice to get this goal and it feels very rewarding to get that point and the three points for the win too.”

“There’s a lot of nerves being a first year playing with new people and being put in different positions all the time, it feels exciting taking a spot because every single one of us on this team deserves to be out there after being chosen by one of the best coaches in Canada.”

The Timberwolves will head on a two-game prairie road trip next Saturday and Sunday when they play the Saskatchewan Huskies (3-0) and Regina Cougars (1-1).

On the men’s side, UNBC rebounded in Victoria with a 2-0 win over the Vikes.

Stu Rowlands scored both markers giving the Timberwolves a mark of 2-3-1 on the season as they welcome the MacEwan Griffins (4-0) on Friday at 7pm from Masich Place Stadium.

POSTGAME: Locked in a scoreless tie in the second half, these two connected on a pair of goals in less than five minutes, propelling @UNBCMSoccer to a 2-0 win over the @uvicvikes. Hear from Stu Rowlands & @OwenBStewart11!! pic.twitter.com/WhIVZ16jAc