Rolling out the dough: Domino’s Pizza donates $100k to celebrate 30 years in town 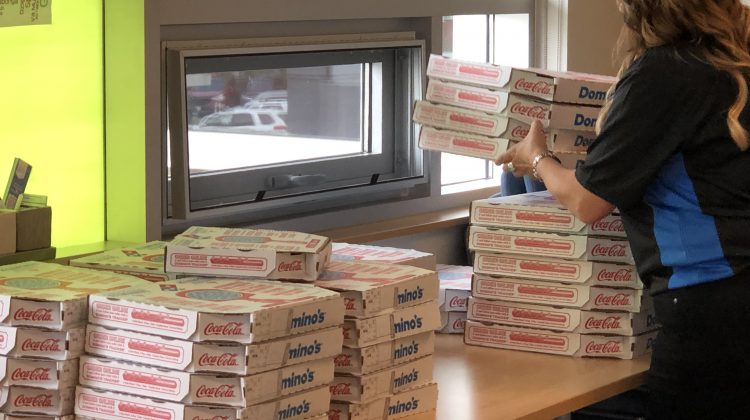 Tanya Larson serves up some Domino's Pizza to the staff at the BC Cancer Clinic in Prince George. (Ethan Ready, MyPGNow)

While Domino’s will be celebrating 30 years of serving pizza here in Prince George, CEO Michael Schlater was serving up something with a sweetened after-taste.

At a special luncheon held at the BC Cancer Clinic in Prince George, located on Lethbridge Street, Schlater presented a cheque for $30,000 to staff at the clinic. However, that was just a small slice of what Domino’s will be dishing out in the months to come.

CEO Mike Schlater of @DominosCanada makes a donation of $30,000 to the BC Cancer Clinic in Prince George.

“I love this town. I’ve been here three times. It doesn’t sound like a lot of times but when you have all these stores, we have 510 stores in the country, but in the next four months [the clinic] will receive a total of $100,000.”

In an interview with MyPGNow, Schlater said he and his wife have been donating to various causes across the country for several years now since hiring someone to handle the operational side of the business.

“It’s taking care of where they have the hardest time getting the money. That’s why we gave them the $30,000 and then upped it to $100,000. Managements’ faces just dropped there because I think what it does is alleviates the feeling of having to worry for a year.”

Schlater and his wife say that they feel lucky enough to be in the position that they are, further adding that it’s important that they give back to communities and people in need.

Following the announcement, Tanya Larson, District Supervisor for Domino’s, said she’s proud to be a part of the company.

She added that the 30th Anniversary festivities will take place at each location in Prince George. In-store customers will be able to enjoy a free meal between the hours of 10 a.m. and 4 p.m. tomorrow (Saturday).