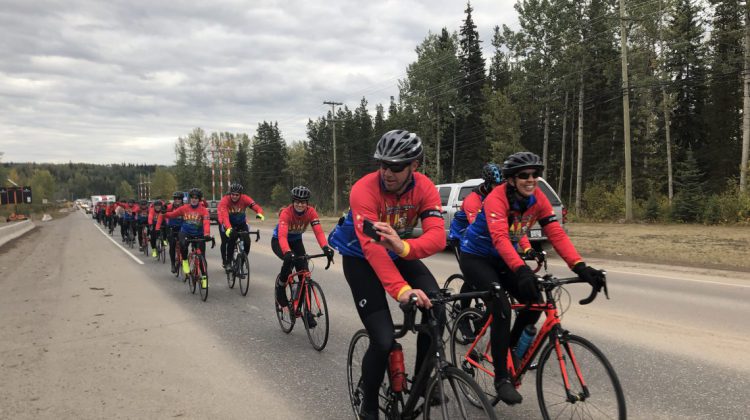 A member of the Prince George RCMP is enjoying the ride of her life.

McAra first became interested in the event while volunteering for another worthwhile cause.

“Three summers ago I volunteered for the Jail’n Bail and a group of riders came through the fundraiser that year and just to see how impactful that was on everybody and just to see them together like that really stuck with me.”

After that, the rest is history.

“And then I made it happen the next year and after seeing the impact we had on local communities and seeing all the children stop by and enjoy what we were doing was incredible and this takes a certain amount of crazy to ride the number of kilometres that we do.”

Unfortunately for McAra and a lot of other people, cancer is a topic that’s all too familiar to them.

“Too many people have been impacted by cancer and a lot of people and it’s a surprising number that actually knows a child who has cancer whether they are cancer-free now, or born with it or still have it and to be a part of that change and raise money for the research is the best feeling.”

McAra took part in the ride in 2018 and was quite impressed by the northern scenery.

The Cops for Cancer Tour de North team will be in Prince George on Saturday from 6:30 pm at the Kordyban Lodge and will also be holding a team breakfast Sunday morning at Denny’s starting at 7:30 AM.