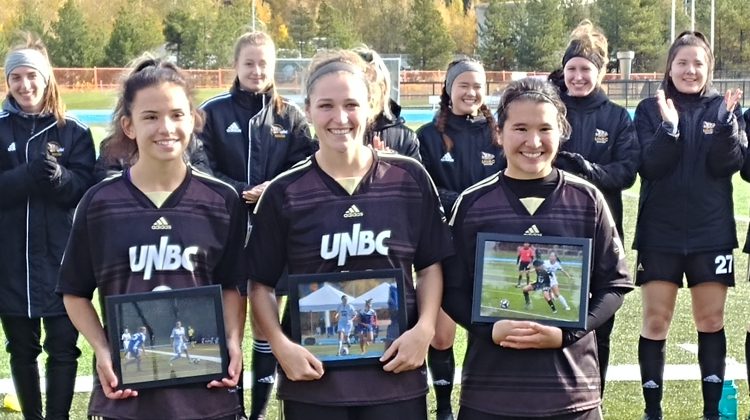 Julia Babicz (#2), Ashley Volk (#16) and Jenna Wild (#22) pose for a picture after a 1-1 draw against the Fraser Valley Cascades. (Photo supplied by Brendan Pawliw, MyPGNow.com staff)

On most occasions, Seniors Day usually encompasses a discount on meals for anyone 65 years of age or older.

But for the UNBC Timberwolves, it was a chance to say goodbye to three players who contributed greatly to the women’s soccer program.

The T-Wolves scratched out a 1-1 tie on Sunday at Masich Place Stadium against the Fraser Valley Cascades in what was the final home game in the university careers of Jenna Wild, Ashley Volk and Julia Babicz.

However, the Cascades gave UNBC all they could handle during the sunny matinee in BC’s northern capital.

Fraser Valley often suffocated the Timberwolves offensive attack with a high-press leading to a flurry of scoring chances only to be turned away by goalkeeper Brooke Molby who recorded six saves.

A defensive breakdown in the 23rd minute allowed fifth-year strike Brittney Zacharuk to get behind the UNBC backline trickling the mesh for a 1-0 lead.

It took until the late stages of the game for the Timberwolves to find their mojo offensively as a long boot by Mara McCleary found its way past the Cascades defenders leaving Sofia Jones with a clear-cut breakaway.

She made no mistake scoring into an empty net past an out-of-position Joven Sandhu.

After the game, UFV midfielder Tavia Jasper told MyPGNow.com it’s a tough pill to swallow after being in control for the majority of the game.

“It’s kind of frustrating to put into words to blow a game we were dominating a lot. They switched to three in the back UNBC needed numbers forward and they did that by scoring a late goal that hurts a lot, especially since we needed those points to get ahead of them.”

“The ball bounced over our centre back due to an unlucky touch and then Jones was super-clinical finishing on her breakaway.”

POSTGAME: @UFVWomensSoccer‘s Tavia Jasper talks about her side’s 1-1 draw with @UNBCWSoccer in Prince George, in an important @CanadaWest matchup. pic.twitter.com/yjyYh0f43H

After the game, a ceremony ensued for the graduating players where they got together with their families, coaches and teammates.

Volk, who is from Victoria, spent the last three seasons with the Timberwolves and is in the process of being hired by the North Saanich Police Department.

“Our playoff runs is something that I will remember the most and the way we have grown together over the years and obviously the playoffs mean the most but we have made so many memories that will last forever.”

Wild has been part of the UNBC roster over the past two years and is transferring back to the University of Victoria where she hopes to become an elementary school teacher. 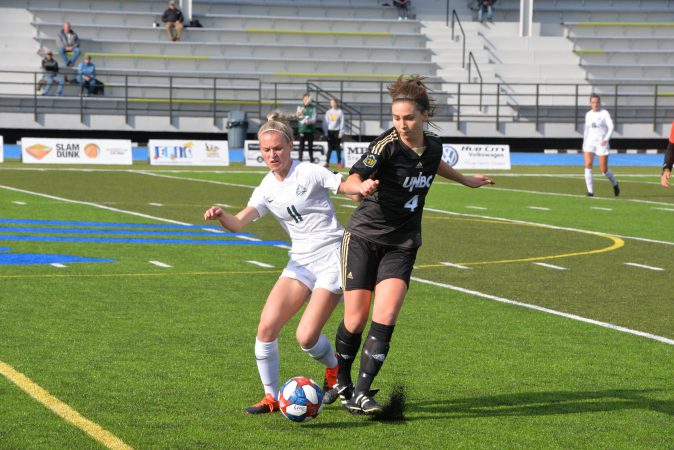 The 21-year-old Victoria product couldn’t say enough good things about her time in the north.

“It’s been so special for me to play and to move up here on my own was super-new to me but the whole experience has been more than I ever could have expected. The program Neil (Sedgwick) has built and the environment he has made has been incredible and I wouldn’t have wanted to experience this anywhere else.”

“I think it’s really easy to play well when you have the type of people I had around me and I think a big part of that has been the team culture, which allows me to grow and be comfortable,” added Wild.

Last but certainly not least is Babicz, a fifth year veteran from Prince George who has suited up in 64 career games with UNBC and is within an eyelash of surpassing former teammate Madison Emmond for the all-time career games played mark.

The Timberwolves face a tough weekend on the road in Calgary against the sixth-ranked Dinos who beat the top-ranked Trinity Western Spartans today by a 2-1 score.

Both games are Saturday and Sunday with a noon kickoff time.

On the flip side, UFV (2-3-5) will have a home and home series against the Spartans.

In men’s action, UNBC fell 2-0 to Trinity Western down in Langley Saturday night.

Rob Goodey made nine saves for the 4-6-3 Timberwolves who have a bye next weekend before finishing at home against Thompson Rivers October 19th and 20th at 1pm from Masich Place Stadium.