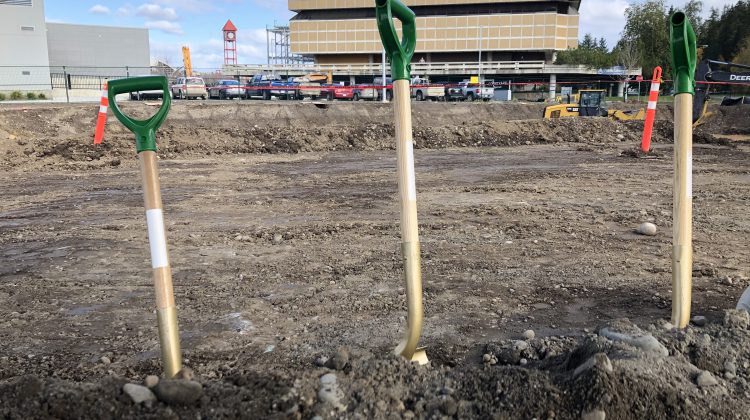 It was a groundbreaking event, literally.

City officials were on hand to officially kick off the construction of Prince George’s latest student residence, right in the heart of the city.

“This is something that I felt very strongly about needing in our downtown for a number of years. I think it’s going to add another great element to our downtown.”

Kelowna-based Faction Projects will be at the helm of the project after city council recently approved a site-specific zoning amendment for the property at 1404 Patricia Blvd.

Hall said it will help in adding the necessary residence in the downtown area to help in a thriving scene.

“It provides for 200-plus students in downtown Prince George. The location is ideal. It’s close to the public library, the swimming pool, close to the Rolling Mix Concrete Arena. I think it’s also going to enhance the nightlife downtown as well. All of the restaurants and pubs are going to benefit from this, and that is an important piece to all of this.”

A number of developers are showing interest in taking on future projects in the downtown area, adding to the revitalization of the downtown core that both the student residences and Park Wood Condominium project is expected to provide.

Once completed, the residence will have 205 micro-units. each unit will be approximately 312-square feet in size, along with plenty of study rooms, lounges, as well as exercise rooms. Also, because it is a private project, the residence will not be exclusive to either of the city’s post-secondary institutions.

Construction on the building is expected to be done during the summer of 2020 with student intake to happen in time for the 2020 Fall Semester.