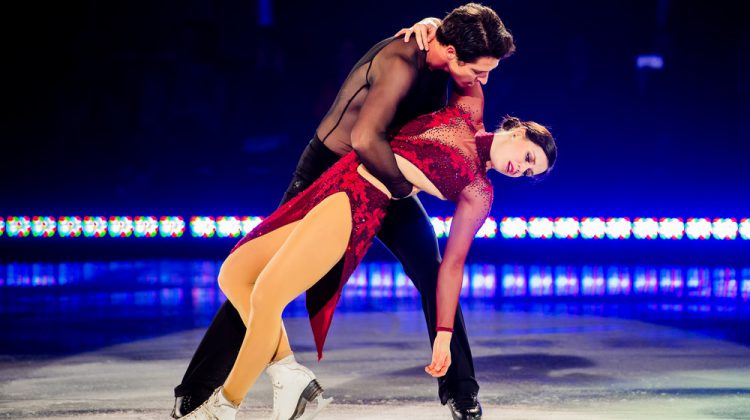 Three-time Olympic Champions Tessa Virtue and Scott Moir are performing in PG one last time as part of Rock The Rink Tour. (Photo supplied by Danielle Earl and CN Centre)

They say all good things must come to an end.

For the dynamic figure skating duo of Tessa Virtue and Scott Moir, it’s one last chance to dazzle the crowd and say thank you to all the fans who have supported them over the past 22 years.

The three-time Olympic champions are part of the Rock the Rink Tour, which makes a stop in Prince George tomorrow night from the CN Centre.

In an exclusive interview with MyPGNow.com, both Virtue and Moir reflect on their storied careers.

“We’re pouring our hearts into every moment we get on the ice and I think the overriding emotion is just gratitude and we’re so thankful for all the support over the years, really appreciative of the opportunity to enjoy performing,” said Virtue.

“It’s been a really special journey so it obviously is a little emotional when it comes to a close but it’s hard to be too upset when you feel so lucky to have had such a great 22 years. It’s a fun way to tour to be on the ice will all of your friends, many of them from around the world with such a talented cast and we’re soaking in every last moment,” added Moir.

So much to be thankful for this weekend! Hope to see you at a rink somewhere along the way – Dawson Creek, Prince George, Grande Prairie LET’S GO!

Virtue and Moir’s list of accomplishments includes being the most decorated figure skaters in Olympic history, which was capped off by a flawless performance at last year’s Winter Games in Pyeongchang, South Korea.

Virtue believes after skating to a third Olympic gold, the timing was right to walk away from competitive skating, making the announcement official in September.

“I think that was a really natural decision for us because we knew even in Pyeongchang and the lead up to that would be our last competitive experience and what a way to go out as it was just a fairy tale from carrying the flag to the team events, that was a dream come true as a competitive athlete and that’s exactly what we set our sights on when we announced a comeback in 2016.”

“We also know what it means to be at our best and to continue to push the boundaries and push ourselves we need to invest a lot into training and after 22 years, I just don’t think we’re at the place in our lives to commit to that level we know we would need to ensure the product remained top-notch.”

Was there anyone moment that stood out in your storied careers more than others?

“We can say our best moments as athletes came at the Olympic games and what a dream come true, for an athlete to be able to say that those are the moments that we take away in our sport because we prepare so much for the Olympics, not that we don’t for the Worlds but the Olympics seem to go to another level,” added Moir.

“Being named the flag bearers for 2018 was such a career highlight and that we were given the platform and the privilege of representing our country on the world stage is the honest honour of all I think,” stated Virtue.

When asked if both of them have inspired a new generation of figure skaters in Canada, they responded by saying their hope is to see kids achieve their dreams in whatever they choose.

“As athletes and Olympians, we’re given a certain platform that we don’t take lightly as I think it is a serious part of our jobs and roles that we feel very grateful for and if it’s not in figure skating we just hope to inspire people to be active and to embrace the joy of sport and the lessons that it brings.”

“It doesn’t mean you have to be an Olympic champion or an ice dancer but just pursuing your own passion fearlessly is a beautiful sentiment we wish to impart,” explained Virtue.

“We know that they’ll be some Canadian kids that are coming up that will just blow our records out of the water and that makes us very, very happy and I think by the time we realize by the time their careers end, those kids will be Olympic champions themselves, which is very exciting,” said Moir.

Once the tour is over, Virtue and Moir will enter uncharted territory, a challenge they’re both looking forward to.

“What a jumping-off point. It’s a really exciting place to be as I can’t remember a time where we had some opening in our schedule where we were able to say yes to some things and take on new challenges, which was really refreshing.” added Virtue.

“They’ll be a focus on schooling and on the business side. I think as athletes we’re used to being our own bosses so there is an entrepreneurial spirit and I look forward to pursuing more projects that are close to my heart like charitable work and more stuff with young women keeping them in sport.

“The more I hear that question on whether or not we should be nervous about our next phase or if we’re more anxious the more I think we should be but I don’t feel that I feel excited since you only get so many years on this rock and you want to make the most of it,” added Moir.

“I can honestly say that I’ve gotten the most out of figure skating that I can.”

The Rock the Rink Tour kicks off at 7pm and will also include fellow figure skating legends like Patrick Chan, Elvis Stojko and Katelyn Osmond.

Here is the full interview: