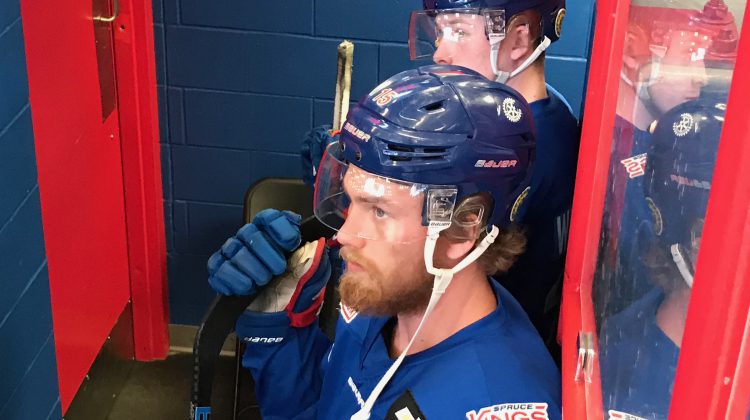 Sean Donaldson had the last laugh against a familiar foe.

The 18-year-old forward and former Prince George Spruce King proved to be the X-factor for the Nanaimo Clippers in a 5-4 shootout victory on Friday over the defending Fred Page and Doyle Cup champs.

Donaldson’s marker would be the only one in a six-round shootout going high glove side against Prince George goaltender Jett Alexander.

“I kind of saw the goalie go down a little to early so I thought I could beat him upstairs.”

This is the third BCHL club in over a year for Donaldson, who was a member of last year’s Spruce Kings team that was one win away from claiming the National Junior A Championship in Brooks, Alberta.

So far, he has recorded four points in 11 games for a Nanaimo team that is 7-3-0-1 in the Island Division, trailing the Cowichan Valley Capitals by four points for top spot.

“It feels good, I really feel like we deserved to win that game killing a lot of penalties off and it just feels good. I am a Clipper now so it’s always good to win for your team.”

The drama-filled game saw the Spruce Kings get on the board first as ex-Clipper Preston Brodziak lit the lamp against goaltender Jordan Naylor to get the crowd of 859 fans at the Rolling Mix Concrete Arena up on their feet.

Nanaimo would then score three unanswered goals between the remainder of the opening period and into the middle frame where Kyler Kovich found the back of the net on a pair of chances followed by Josh Bourne’s fifth of the season.

However, the momentum swung again, after Fin Williams tapped home a Chong Min Lee feed past Naylor to make a 3-2 game.

Prince George found themselves on even terms heading into the third when Corey Cunningham deflected a Mason Waite point shot for his first of two on the evening.

After an early goal by Scott Mahvolich to put Nanaimo back out in front, the plot thickened again when Clippers forward Travis Walton received a five-minute major penalty for a blow to the head of Chong Min Lee.

Even though the Spruce Kings didn’t score on the five-minute power play, they evened the game on the man advantage after Cunningham slapped home a cross-ice feed from Nic Poisson to even the game at 4-4.

Cunningham told MyPGNow.com after the game a slow start to the third spoiled an otherwise solid outing.

“Our first and second periods were really good and then we really hit with eight minutes left in the third period but just that 12 minutes we gave up on was capitalized by them but I thought we outplayed them, we had more shots in the first 40 minutes and we had all the energy and momentum but couldn’t score on a 5-on-3 power play, which kind of sucks.”

Prince George had a tough time keeping the likes of Kovich and Ethan Scardina off the scoresheet for Nanaimo (7-3-0-1).

Kovich admitted playing with a guy like Scardina can do wonders.

“The two goals meant nothing today as it was a full team effort and our goalie stood on his head to help us get the win.”

“It helps playing with Scardina, he is a great player and he set me up to get those two great goals.”

With the loss, the Spruce Kings fall to 4-5-2-1, fourth in the Mainland Division seven points back of the Coquitlam Express.

Poisson believes PG is right on the cusp of breaking out.

“We’re down some bodies obviously with your captain (Nolan Welsh) and top defenceman out (Nick Bochen) things get hard because you don’t have any veteran presence out there on the back so if we take a couple of more weeks to get healthy, we could start to head up the standings.”

He spent the last two seasons with the WHL’s Medicine Hat Tigers.

The Spruce Kings are back in action tonight against the Salmon Arm Silverbacks (9-2-1-0).

Puck drop is at 7pm from the RMCA.