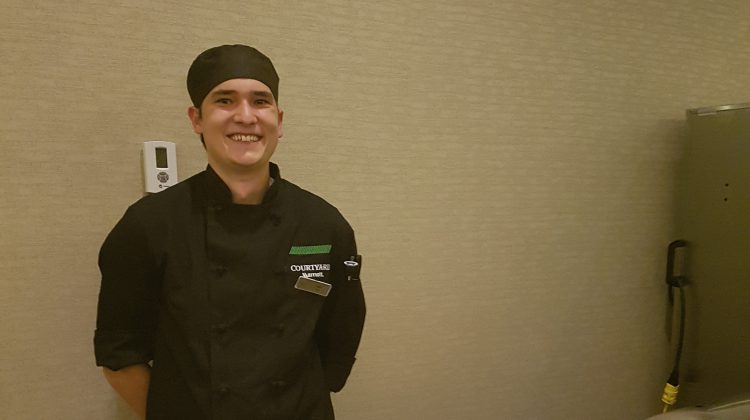 Aaron Ivanoff, a Prince George chef, is one of 11 invitees to the Culinary Apprentice of the Year Award competition. (supplied by Industry Training Authority)

A Prince George chef will be taking his culinary skills to the provincial kitchen to see how he stacks up in the Culinary Apprenticeship of the Year Award competition.

Aaron Ivanoff will participate in the one-day competition, which takes place on Nov. 2 at Vancouver Community College’s downtown campus.

Ivanoff, a professional cook at the Courtyard by Marriott, is one of 11 chefs that have been selected out of 40 applicants. The competition is being revived after a decade-long absence and, for the first time, is including competitors from across the province.

“I’m very grateful for the opportunity,” Ivanoff told MyPGNow. “There’s a lot of good competition out there, so I’m quite anxious to see what they come up with and see if I can stack up against them.”

Ivanoff believes food is always a celebration that should bring people together.

“I always loved cooking as a kid. I was always helping my parents in the kitchen, so it kind of became my hobby. After a while, I thought if I really liked it then why not do it as a job. From then on, I’ve just been working my way up through the professional system. At this point in time, competition is just the next level for me.”

He’s looking forward to the experience and opportunity to network with people who are in the industry.

Competitors will be required to create a three-course meal for judges and invited guests at the culinary event.

“CNC’s professional cook instructors praised Aaron as a dedicated student who always strived to do his best throughout the Level 1 and Level 2 training he completed at CNC,” said Frank Rossi, Dean of Trades and Technologies at CNC. “He won an award for being the top student in his class, and it’s great to see him further his training. He’s the first participant in the Culinary Apprentice of the Year Award competition to train at CNC, and we wish him the best of luck.”

If Ivanoff happens to be crowned the winner of the competition, he’ll have the opportunity to accompany Culinary Team BC to Germany for the World Culinary Olympics in February 2020.