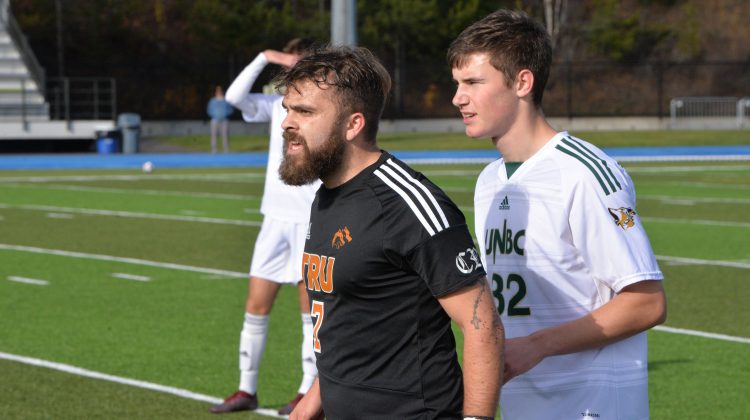 For 56 minutes, the UNBC Timberwolves men’s soccer team looked poised to end the playoff dreams of the TRU Wolfpack.

Then along came Justin Donaldson.

His game-winning goal in the 57th minute past T-Wolves goalkeeper Rob Goodey paced the Wolfpack to a 4-0 victory at Masich Place Stadium on Saturday, improving their record to 5-5-5.

“I think in the second half we came out and we understood that we only had 45 minutes to prove that we could stay within playoff reach so it was an aggressive mindset coming out and I felt that when the first goal came, it bolstered us through,” said Donaldson.

POSTGAME: With two goals, including the GWG, @Justinmd07 of @GoTRUWolfPack talks about his team’s victory over @UNBCMSoccer, and what they’re expecting in a must-win game tomorrow to wrap up the @CanadaWest regular season. pic.twitter.com/9ccdZUG11h

The flood gates continued to open after Jan Pirretas ripped home a feed from Marco Favaro in the 71st minute to put TRU up by a deuce.

To add insult to injury, Donaldson rippled the onion bag for the second time on a penalty kick.

Dylan Hooper put the icing on the cake in the 86th minute who showed some jubilation near the UNBC bench.

The loss ends the playoff drive for the Timberwolves who drop to 4-7-3 ahead of Sunday’s rematch against TRU (1pm at Masich Place).

Despite the loss, UNBC head coach Steve Simonson believes the team has a lot to be proud of.

“We had a couple of chances in low, and Gardner makes a couple of good saves and they come and bury one, their game plan worked for them and they are a tough team to play against, they’re quick, aggressive and capitalize on your mistakes and based on that alone, you could say they deserved the game.”

“We probably did better than a lot of people on the outside would have given us credit for and I said at the start of the season it was either going to be a rebuild or a changed season and it was more of a changed season with lots of new faces. To go into the final week with a chance to still make the playoffs in a division where only one team had clinched going into Friday shows how competitive it is.”

POSTGAME: A 4-0 defeat at the hands of the @GoTRUWolfPack officially eliminates @UNBCMSoccer from @CanadaWest playoff contention, but @UNBC Coach @stevesimonson7 is happy with his side’s effort. Hear from the TWolves’ bench boss here: pic.twitter.com/7FCQpkeqgT

UNBC was not without its chances in this game as Stu Rowlands hit the post and then Wolfpack goalkeeper Jackson Gardner robbed Anthony Preston a few minutes later.

On the women’s side, the Timberwolves are in the playoffs for the third consecutive season despite dropping a pair of road games to the Victoria Vikes (1-0 on Friday) and UBC Thunderbirds (3-1 on Saturday).

Sofia Jones scored her sixth of the campaign against UBC in the loss, which sees the Timberwolves end the Canada West regular season schedule with a mark of 3-6-4.

PLAYOFFS! With @GoTRUWolfPack‘s loss tonight, your @UNBCWSoccer team is headed to the @CanadaWest playoffs for the third consecutive year!!! @UNBC take on @ubcwsoc tomorrow to finish off the regular season!! #gotwolves pic.twitter.com/hGMVHFGmN5

ICYMI: Expansion to Car 60 Program to be proposed by PG city councillor