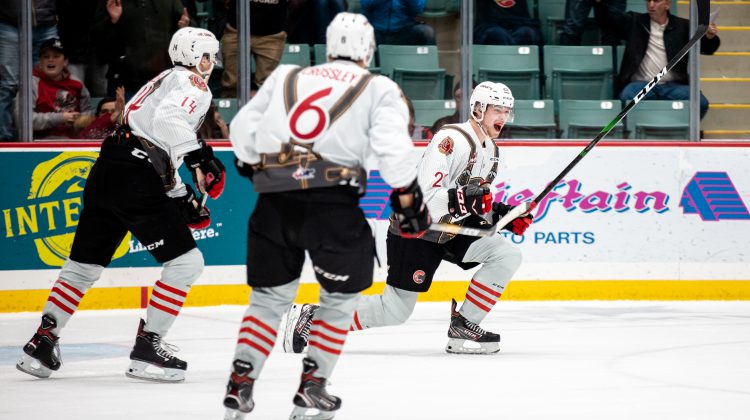 The Prince George Cougars only took three penalties against the Spokane Chiefs but their last infraction was the most costly.

Michael King tipped home the game-winner at 16:56 of the third period through the arm of Taylor Gauthier to skate away with a 5-2 victory on Saturday in front of 3,027 fans at CN Centre.

“It was just a shot from the point and we got a double screen that went off a couple bodies and got lucky. We need to be more consistent doing the little things right and sticking with the system and not to be selfish,” said King.

Earlier in the sequence, Cougars forward Mitch Kohner got called for slashing in the attacking zone spoiling what may have been a chance at a weekend sweep on home ice after edging Spokane 2-1 on Friday.

After the game, Kohner displayed his disappointment with himself in an interview with MyPGNow.

“I didn’t make a smart decision in the offensive zone, which got us the penalty and cost us the game. I need to be more disciplined.”

Mitch Kohner of @PGCougars upset with himself after 5-2 loss to @spokanechiefs in @TheWHL action on Saturday #CityofPG #sports pic.twitter.com/mQCm2ZG6vX

The late infraction put a damper on what was otherwise a pretty solid outing for the 17-year-old forward from Rosemont, Minnesota who sprung Josh Maser on a breakaway feed in the first period to give the Cats 1-0 lead after 20 minutes.

Spokane picked up the slack offensively with a pair of goals in the second period courtesy of Minnesota Wild prospect Adam Beckman who out waited a sprawled out Taylor Gauthier to tie the score at one.

Later on, Bear Hughes potted his third of the season to give the Chiefs their first lead of the game, connecting on a three-way passing play with Reid Jacobsen and Noah King.

After a flurry of chances to begin the third, Brendan Boyle jammed home a mad scramble in the crease past Spokane goaltender Campbell Arnold to even the score at 2-2.

Eric Atchison and Ty Smith added insurance markers for the Chiefs who improve to 5-4-1-0 in the ultra-competitive US Division.

“We kind of learned from a couple of games before after giving up a lead and we realized we have to continue to play our game and not give up anything and that’s we did the last few minutes, we kept playing our game and didn’t let them have anything,” said Beckman post-game.

The loss drops the Cougars record to 3-6-0-1 on the season, which sees them remain last in the BC Division but also tied in points with the Victoria Royals and Seattle Thunderbirds for the final wild card spot in the Western Conference.

Prince George was out shot 38-19 overall spoiling a decent outing from Gauthier.

“I thought we were in it the whole game, obviously it’s not the result we wanted as the bounces didn’t go our way and we just couldn’t come back from it.”

“I think when you play the same team back to back nights, the second one is going to be a tighter game, last night’s win took a lot out of us but I thought we put out a good effort but didn’t get the results we wanted,” added Gauthier.

Earlier in the day, the Cougars made splash on the trade front sending 19-year-old forward Jackson Leppard to the Winnipeg ICE in exchange for 19-year-old defenceman Marco Creta, 18-year-old forward Holden Kodak, two third round draft picks (2021 and 2022), and a conditional fifth-round pick (2020).

Cougars Head Coach and GM Mark Lamb addressed the deal after the game.

“He’s been here a long time and you know, we’re in a different type of transition with our team. We are still going to try and do our best but we are still building it, we get a couple of bodies that will fit in to our team along with the draft picks for the future.”

Both Creta and Kodak are expected to be in the lineup Tuesday when the Cougars host the Swift Current Broncos followed by a Wednesday tilt against the Kelowna Rockets at CN Centre.

In 177 career games with the Cougars, Leppard recorded 70 points including 28 goals and 42 assists.

The game also marked the return of former PG Spruce Kings head coach Adam Maglio who is the associate coach of the Chiefs under bench boss Manny Viveros.

ICYMI: Expansion to Car 60 Program to be proposed by PG city councillor