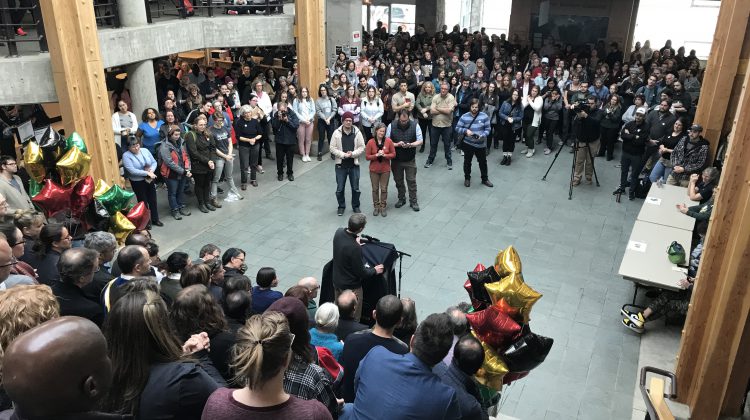 Rally in support of the Faculty Association at UNBC (Cole Kelly, MyPGNow.com staff)

The energy was palpable at UNBC today (Wednesday) as affected faculty and their allies gathered for a rally in support of the school’s Faculty Association.

The stairs and hallways of the Canfor Winter Gardens were packed with people as presenters spoke passionately to the crowd.

“What we want?” Asked Dr. Stephen Rader, Professor of Chemistry and President of the Faculty Association. Hundreds of voices answered him, “Respect!”

There are less than 20 hours left for the teams to bargain before the 72-hour strike notice, issued on Monday, ends and the picket lines go up, halting classes and affecting up to 3000 UNBC students.

“I’m still hopeful that we can reach an agreement, but time is ticking, they need to get working,” said Rader.

“In principle, they could keep bargaining all night, we might not know until 6:45 tomorrow morning that the strike is called off.”

Hundreds of people have shown up in support of the Faculty Association. Should negotiations not prove successful today, the picket lines will go up tomorrow at 7:30 a.m. pic.twitter.com/1Gxi5Y3Hz7

He told MyPGNow that what’s standing in the way here is not just wages, but the distribution of them.

“What they’re offering to the professors is fine, but they’re offering essentially nothing to the lab instructors and the librarians and other members of our bargaining unit and we can’t just bargain for ourselves. In addition, they’re trying to reduce some of the rights that we have as a union and so we are trying very hard to maintain those rights, they’re the foundation of what we do at UNBC.”

Should an agreement not be found, a strike will begin tomorrow morning at 7:30 a.m.