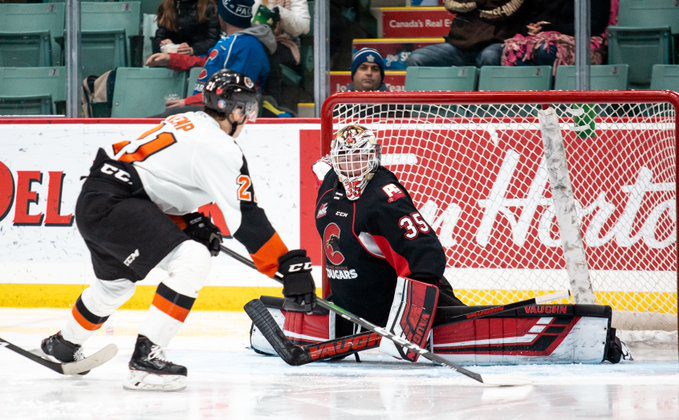 Taylor Gauthier (35) goes down to attempt a save during the Prince George Cougars' game against the Medicine Hat Tigers on November 6, 2019. (Brett Cullen Photography)

The Prince George Cougars allowed five goals in the second period to fall to the Medicine Hat Tigers 5-4 on Wednesday night at the CN Centre.

Cougars’ defenceman Cole Moberg scored twice for the Cougars and finished with three points in a losing effort. Mitch Kohner and Jack Sander scored the other two goals for Prince George. Ryan Schoettler chipped in with two assists. Both of Moberg’s goals came on the man-advantage as did Sander’s.

Leading 2-0 early into the second stanza, the Tigers rallied and scored five goals in less than nine minutes to put a hush to the 1,826 fans in attendance. Captain James Hamblin had a two-goal night in the victory.

Kohner scored just under two minutes into the game to take an early lead for the hometown Cougars. Quickly into the second frame, Moberg wound up a shot and rifled the puck towards the net. On its way, the puck redirected off of a Tigers player and into the back of the net to put Prince George up 2-0 before the Tigers mounted their comeback.

“When it starts going bad like that, that’s when the leadership needs to kick in. Everybody on the ice has to do their job. What we did, we just got flustered,” Cougars’ head coach and general manager Mark Lamb said following the game. “We tried to do too much and turned the puck over. That team has played the same way for years. They’re a really good team; they’re a hard team, a fast team, they’re hard on pucks, and when you turn the puck over that’s what’s going to happen.”

Tyler Preziuso scored his fifth goal of the season on the power play to get the Tabbies on the scoresheet and create the momentum for the visiting team.

Just over a minute later, Hamblin redirected Dru Krebs’ point shot to score his first of the night and bring the game to a stalemate.

Midway through the period, Parker Gavlas sent Brett Kemp a cross-ice pass and Kemp, from his knee, fired the puck from the bottom left circle past the blocker of Cougars’ goaltender Taylor Gauthier.

After being out this past weekend due to a lower-body injury, Gauthier made his return to the crease for the Cougars for what would mark his 100th WHL game.

While on the powerplay, Ryan Chyzowski won the faceoff and Hamblin fired the puck through the legs of Gauthier for his second goal of the night.

Shortly after Hamblin’s second marker, Caleb Willms skated down the wing and passed the puck across to Baxter Anderson who did not hesitate to bury the puck into the back of the net and score his first of the season.

Associate coach, Jason Smith said turnovers, especially in the second period, was what hurt the team in the loss.

“We didn’t have any pace. When you’re turning the puck over in the neutral zone, you’re forcing yourself to spend a lot of time in the defensive zone and you’re stuck defending. When you don’t get the puck out of your zone the first or second time, and you’ve got to spend more time in there, you don’t get fresh guys on the ice. By the time you finally do get the puck out of the neutral zone you’re tired, so you don’t have any pace and the game becomes slow and sloppy.”

In the final frame, the Cougars rallied and scored a pair of powerplay goals to make it 5-4. After a slight stumble, Ethan Browne found a driving Moberg through the left circle as he then potted his second of the game before Sanders brought the home team within one.

While pushing to snap a five-game losing skid, time would expire with the puck buried in the attacking zone.

Rookie goaltender Garin Bjorklund stopped 24 of 28 shots faced and Gauthier turned aside 24 of the Tigers’ 29 shots.

The Cougars (4-12-0-1) will now look towards the weekend as they get set for two crucial tilts against the Victoria Royals (7-7-1-0). The Royals sit one spot ahead of PG in the BC Division standings and currently hold onto the second wildcard spot in the Western Conference.

Prince George will be hoping to have forward Vladislav Mikhalchuk in their lineup this weekend. The Cougars announced his welcoming back earlier on Wednesday after starting the season with Torpedo Nizhny Novgorod in the Kontinental Hockey League (KHL) in Russia.