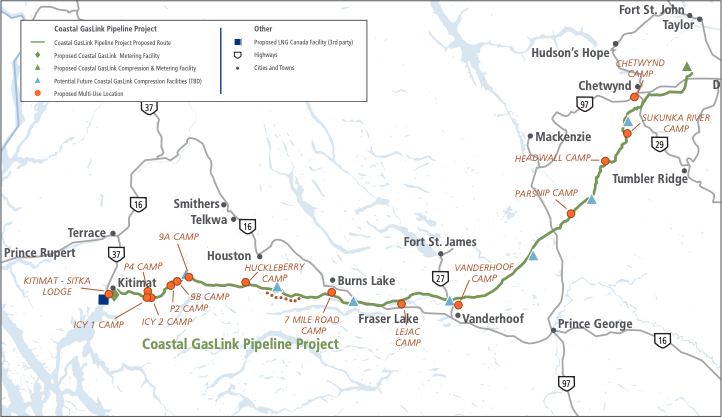 One woman was arrested on Tuesday in Houston after interfering with the Coastal GasLink project.

Police were performing routine patrols in the area of Morice River Forest Service when a work vehicle was being prevented from traveling the road by three protestors.

“Despite these requests, one adult woman directing the action refused to comply and was arrested for breaching the BC Supreme Court-ordered injunction against persons interfering with the Coastal GasLink project,” she said.

The 29-year-old woman was processed at the Houston RCMP detachment but was then transported to Smithers RCMP.

CGL was in contact with the RCMP and, after reviewing the incident, they advised that they had inadvertently not followed an agreement that they had made with the protestor regarding access. According to the RCMP, given this information, they exercised discretion and released the protestor with the understanding that the matter would be resolved between the parties.

Saunderson added that the RCMP is an impartial party in ongoing protests.

“Demonstrators have a right to lawful, peaceful and safe protest and companies have a right to complete their work. The RCMP is working hard to ensure that these rights are protected for everyone,” she said.

As a result of the woman’s release, she was relieved of having to appear in court and no charges were laid against her.

With files from Lindsay Newman, MyBulkleyLakesNow.com