Cougars battle back from controversy, lose to Royals in shootout 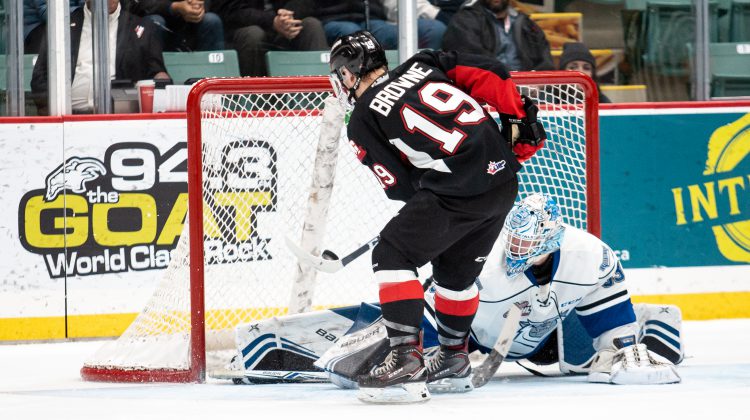 Ethan Browne goes in for a shootout attempt against the Victoria Royals on November 8, 2019. (courtesy of Brett Cullen Photography)

The Victoria Royals outlasted the Prince George Cougars on Friday, winning 3-2 in a shootout at the CN Centre.

Victoria’s Tarun Fizer scored the shootout-winner, in the fourth round of the skills competition, as the Royals earned their third victory in three games against the Cougars this season.

It was a scoreless stalemate up until the third period when the two teams combined for four goals to push the game beyond regulation. It also was a period marred by controversy.

Josh Maser and Connor Bowie scored for the Cougars and both those goals came inside the final two and a half minutes, and with the Prince George net empty. Down 2-0 with just over two minutes left in regulation, Maser and Bowie scored 1:18 apart to bring the Cougars level and force overtime. Taylor Gauthier was tagged with the loss after he stopped 22 of 24 shots through regulation and overtime.

The game was scoreless up until the four-minute mark of the third period when controversy arose. The Royals opened the scoring at 4:16 on a goal by Kaid Oliver. That despite what looked to be a clear off-side play at the Cougars’ blue-line seconds before. The puck came outside the blue-line before being thrown down toward the net, where Oliver was waiting and tucked it in. Victoria then added an insurance marker with just over four minutes left in the game, as Phillip Schultz made it 2-0 at 16:11.

Cue the comeback by the Cougars. Maser made it 2-1 with 2:07 left in regulation after he wired Filip Koffer’s pass past the Royals’ Brock Gould. Then, the Cougars pulled the goalie again and it was Bowie getting a piece of Cole Moberg’s point-shot to redirect it in with just 49-seconds left on the clock.

Overtime solved nothing. In the shootout, Ethan Browne gave the Cougars the lead in the first round, but the Royals then got goals from Oliver and Fizer to secure the win and extra point.

It was a defensive battle through two periods. The Cougars held the Royals to just 10 shots through 40-minutes, including just four in the middle frame alone.

The Cougars are now 0-2 in the shootout and both losses have come to Victoria. Friday’s setback drops the Cougars’ record to 2-6-0-2 against the B.C. Division. Vladislav Mikhalchuk didn’t play Friday, despite being in Prince George since Thursday, as he waits for his release from the KHL to be finalized.

The Cougars (4-12-0-2) finish the weekend doubleheader against the Victoria Royals (8-7-1-0) tonight (Saturday) at the CN Centre; the puck drops at 7:00. The game also marks TC Energy Heroes Night as part of the Remembrance Day long weekend.