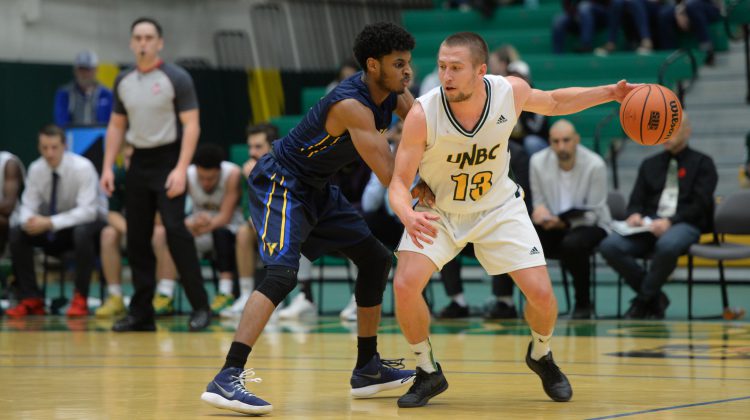 With the clock ticking down, Vova Pluzhinikov took matters into his own hands and put the UNBC Timberwolves men’s basketball team on his back.

His buzzer-beating shot gave the T-Wolves a dramatic 88-86 victory over the Trinity Western Spartans (0-4) in Langley on Saturday.

MUST WATCH! With less than ten seconds to go, and the game tied at 86-86, the Ukraine Maker @VovaPluzhnikov did this! pic.twitter.com/9j9RZzpxEd

His teammate Tyrell Laing had a game-high 23 points for UNBC.

Jack Nadelhoffer had 26 points in defeat for TWU.

The Timberwolves improve to 3-1 on the season.

On Friday, UNBC outlasted the Spartans 100-87 where Pluzhnikov potted 26 points.

Laing put up 23 more while Spencer Ledoux and rookie Fareed Shittu 14 points each.

Fareed Shittu is figuring out this @CanadaWest basketball thing. The freshman goes and gets this alley-oop for @UNBCBasketball, on a dish from @VovaPluzhnikov! #gotwolves pic.twitter.com/Kn1KQXLKvr

In women’s action, the Timberwolves split a pair against Trinity Western.

Madison Landry led the way with a 20-point effort giving UNBC a 70-62 victory from the Langley Events Centre on Friday.

The Spartans fought back on Saturday with a 63-52 triumph.

Nicole Fransson shouldered the load for Trinity Western (1-3) with 26 points while Shakirova recorded 18 points in defeat for the T-Wolves who also drop to 1-3.

Both varsity teams are back at the Northern Sport Centres Friday and Saturday against the UBC Thunderbirds.

Local woman recovering after losing everything in a house fire

How art facilitated friendship for one Prince George woman