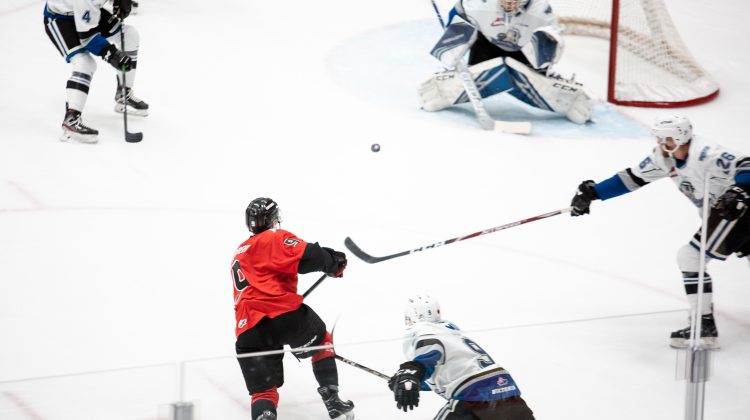 Secondary scoring is key for any team to succeed in the Western Hockey League and for the Victoria Royals, they got it when the game was on the line.

Sean Gulka’s snapshot past Taylor Gauthier at 3:02 of the third period turned out to be the dagger for the Prince George Cougars losing a 2-1 decision on Saturday in front of a season-high crowd of 3,051 fans at CN Centre.

Victoria Head Coach Dan Price spoke glowingly of the 18-year-old’s effort in what was another tight-checking affair between both teams.

“Gulka had a great game. To score the winner and if I’m not mistaken was the guy who blocked a key shot in the dying seconds to preserve the win so those are the ugly things you need to do to win.”

“PG played very well as they always do against us, they are well coached and tough to play against as all four games against them have been decided by one goal but the power play capitalized for us and got us rolling.”

The weekend sweep for the Royals puts them nine points up on the Cougars for one of the two wildcard spots in the Western Conference.

Josh Maser opened the scoring for PG 2:58 into the game taking advantage of a pass from Ilijah Colina, which found the back of the net against Victoria netminder Shane Farkas.

Kade Oliver changed the offensive fortunes of the Royals 12:19 into the middle frame where his blooper shot beat Gauthier to even the score at 1-1 after 40 minutes.

Oliver spoke post-game with MyPGNow where he touched on his team’s road success.

“When we come on the road it’s tough to play in other barns and each team that we played this week is a solid group and it’s just a matter of getting each point and grinding it out.”

The Royals gutted out a 3-2 shootout victory over the Cougars on Friday who drop to 2-8-0-1 at home.

Despite coming out with back-to-back solid performances, Cougars defenceman Rhett Rhinehart said missing out on two chances to gain ground in the playoff race is pretty disheartening.

“It’s pretty crappy to see, we’re in both of those games and it comes down to one shot, one goal and a lucky bounce gave them a partial breakaway and they capitalized.”

“The biggest thing for us is to stay patient, we’re getting lots of opportunities, we’re not scoring the most amount of goals but Mark (Lamb) has been big in preaching patience for us and he’s telling us to keep going until we get one.”

Prince George is back in action on Friday when they visit the red-hot Kamloops Blazers (12-6-0-0).

You can catch all the action on 94.3 The Goat with Fraser Rodgers doing the play-by-play from Sandman Centre.