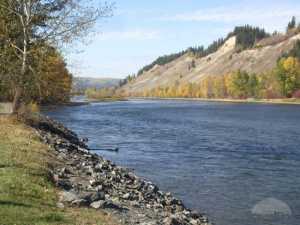 The trial of the Saik’uz and Stellat’en First Nations Vs. Rio Tinto (Alcan), B.C, and the federal government will be conducted in the Prince George Provincial Court for five days next week.

According to Chief Priscilla Mueller of the Saik’uz First Nation, the court case centers on the devastating impacts of the construction and operation of the Kenney Dam on the Nechako River, its fisheries, and Saik’uz and Stellat’en’s constitutionally protected aboriginal rights.

The 200-day trial began last month in Vancouver and is relocating here to allow Elders and members from both communities to give testimony and observe the proceedings without having to travel.

“The first couple of weeks it’s been very positive but also very emotional for the people testifying,” said Mueller. “It’s the devastation of where the river is at today, the loss of our salmon, our sturgeon, which is almost extinct now, we used to have hundreds of sturgeon in our river.”

Mueller said that should they lose the trial, there may be a complete decimation of the sturgeon and salmon in the area.

“It’s getting worse, we won’t have much left if this continues. It already has been devastating, we have to buy fish now, it’s really sad to see that.”

They are hoping the courts find Alcan responsible for restoring the Nechako River to the state it was in before the construction of the Kenney Dam.

“We want our river restored. We’re just hoping that Alcan will get the river back to the way it was before, like 50 years ago. I think if Alcan could releasing water certain times of the year, maybe more often than once a year where a lot of times it causes floods. If they could release water maybe four times a year.”

The Saik’uz and Stellat’en First Nations will be holding a ‘Rally for the River’ on the steps of the Prince George Courthouse this Monday at 9:00 a.m.