Landry leads the way as UNBC WBB soars past T-Birds 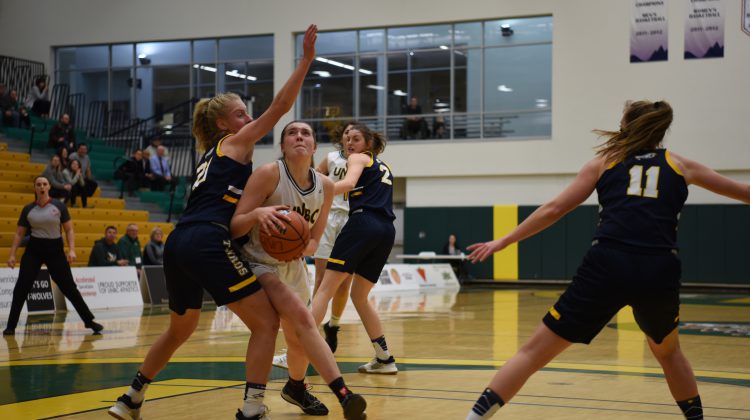 Every time the UBC Thunderbirds tried to get on a roll, Madison Landry always seemed to have an answer.

The fourth-year player from Duchess Park posted a 24-point effort on Friday giving the UNBC Timberwolves an 80-63 victory at the Northern Sport Centre.

“I think the biggest thing from tonight was even when they had their push we knew how to respond, they brought it down to a two or three point gap and we responded by making it bigger and bigger and that was the key in tonight’s win.”

After pulling ahead by a 36-28 score at half-time, the Thunderbirds 3-point shooting caught fire in the third quarter making it a 40-39 game at one point before the Timberwolves hit the accelerator.

Part of that was the aggressive defence shown by UNBC (2-3), which forced the T-Birds to turn the ball over 27 times over the course of the game, scoring 31 points off those errors.

“I think we really focused on their key players at practice this week and we just knew who to look out for and that was the biggest thing.”

This is the third consecutive loss for UBC after a pair of opening weekend road victories over the Regina Cougars.

Keylyn Filewich posted a double-double in defeat for the Thunderbirds scoring 13 points and 13 rebounds.

She told MyPGNow post-game her team couldn’t get in sync.

“I think the entire team was struggling offensively and I think the struggle that we’ve had so far is on offense, I think our defensive execution was pretty solid but we need to find that flow offensively and we just haven’t found it yet.”

The Thunderbirds were also without fifth-year Australian guard Madison Penn along with fourth-year local product Marcie Schlick who are both injured.

Emma vanBruinessen left the game in the second quarter after a collision in the paint and did not return for UNBC.

The Thunderbirds recorded 46 points in the paint and went 14-for-38 from three-point range.

Jadon Cohee scored 20 points in the win for UBC who attributed the team’s success to some adjustments they made in the second quarter.

“Our whole idea was to get the ball to the high post and take it to the opposite side, that’s we we did and I feel like it allowed us to get open shots and when we make shots we play better defence. I wish we would play good defence the whole game but for us, that only happens when we start scoring.”

Freshman Fahreed Shittu recorded 11 points and eight rebounds in 24 minutes of action for UNBC who stated it was important for the team’s young nucleus not to fold the tent on home court.

“I’m very happy with the persistency of our team, even though we got ourselves into a hole we kept our heads up and we tried to push as much as we could.”

“Our goal out there is to get better every minute, so I think no matter what the score is the mindset should always be to get better whether it’s for tomorrow or the last game of the season.”

Tyrell Laing and Vova Pluzhnikov both had 20-point games for the Timberwolves.

With 11 points, 8 rebounds, and 2 blocks, freshman Fareed Shittu earns the @MrMikesPG Player of the Game in @UNBCBasketball's 96-78 loss to @ubctbirds. Rematch tomorrow at 7 PM! #gotwolves pic.twitter.com/nBi7nYA1Hd