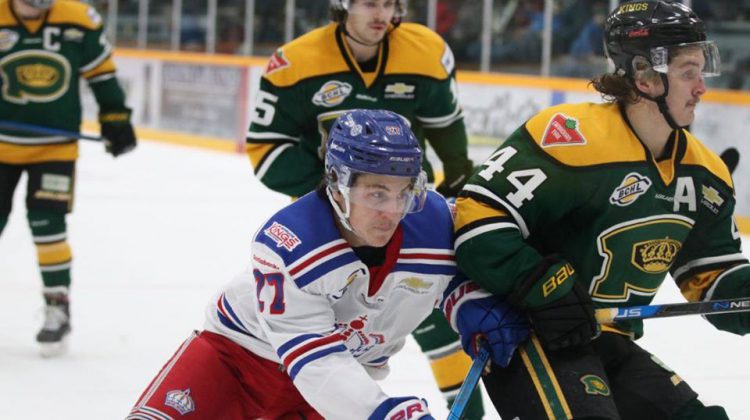 Talk about an instant impact.

Brett Roloson made himself feel at home in the Rolling Mix Concrete Arena on Sunday.

His two power-play goals were the difference for the Powell River Kings during a 2-1 win over the Prince George Spruce Kings in BCHL action.

The 19-year-old forward is proving to be a savvy addition for Powell River who acquired him from the Merritt Centennials, putting up five points in his first six games since transferring over into the Island Division.

“The power play started to click and I found some holes through the goalie and it helped us win,” said Roloson.

It only took eight seconds for Roloson to lit the lamp on a Corey Cunningham double-minor for high sticking at 15:27 of the first period as he cashed in on a feed from Reilly Moran and Michael Abgrall giving the visitors a 1-0 lead after 20 minutes.

Roloson struck again at 10:19 of the second period gaining an edge on Spruce Kings defenceman Evan Orr before rifling it stick-side past goaltender Jett Alexander for a 2-0 lead.

Nick Bochen cut the deficit in half for Prince George with a power-play goal just three minutes solving Powell River goaltender Derek Krall for a 2-1 game after 40 minutes.

The Spruce Kings continued to pour it on into third but were unable to net the equalizer, with the best chance coming off the stick of Cunningham who made a lacrosse-style move behind the Powell River net and just missed tucking it home.

Prince George went 1-for-3 on the power-play while Powell River was 2-for-3.

The Spruce Kings drop to 11-16-2-3 and are last in the Mainland Division but are a point back of the Langley Rivermen for third place.

“It’s tough. This is another one goal deficit game and this was their third game in four days and we just got off a tough trip but we had four days of rest before this, we should have won this game for sure.” said Cunningham.

Nick Poisson and Fin Williams were absent from the lineup as they attend the Team Canada West World Junior A Challenge camp while Chong Min Lee missed the game due to injury.

Sunday’s game also marked the Spruce Kings debut for Domenic Garozzo who was acquired from the Salmon Arm Silverbacks on Saturday for future considerations.

Prince George continues a five-game home stand against the Chilliwack Chiefs Thursday and Friday at 7:00 pm from the RMCA.