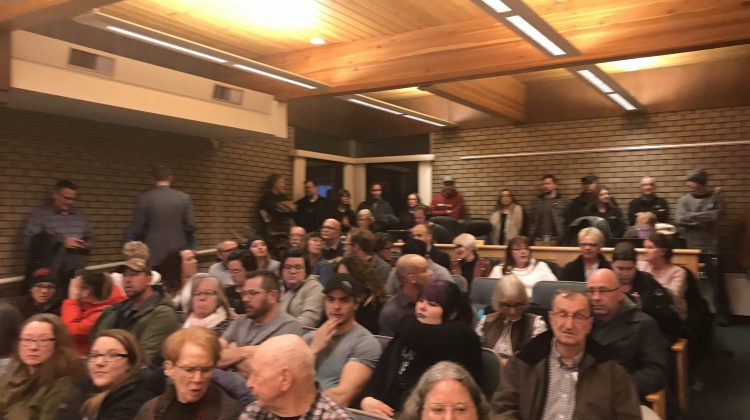 The PG council chambers was packed to the gills on Monday night. (Photo supplied by Brendan Pawliw, MyPGNow.com staff)

It was a meeting of the minds last night (Monday) at Prince George City council where residents had their say on how to fix the social issues downtown.

One of the suggestions brought forward was a 24/7 safe injection site in the northern capital by concerned resident Jordan Tucker.

Tucker explained to MyPGNow.com how this and a more affordable housing model could help eliminate some of the issues downtown.

“A 24-hour safe injection site would be incredibly important for our community and I think that if you have a business downtown you should have a sharps bucket, you should be giving access to those who need to safely dispose of their needles and I think affordable housing is very important.”

She adds it’s not a realistic goal to get the city’s most vulnerable to stop using drugs.

“It’s a huge ask, and we know that safe injection sites work and we know that they are going to be one of the only things that will be OK. The idea of restricting drug use is simply unrealistic for the most part.”

“Asking someone to simply get off of drugs is ignoring the very real problems that they face, a lot of times they are dealing with trauma and using drugs is simply the only way that they can deal with that trauma.”

Kerry Pateman is the coordinator of the Community Partners Addressing Homelessness who believes the timing of the meeting was less than ideal.

“I’ve got many partners around the table and I would have liked to have bring some of these suggestions from them and consult with some of the service sectors.”

Pateman adds even if she was apart of the December 16th meeting involving Downtown PG, the Chamber of Commerce and the Gateway Business Improvement Association, it still wouldn’t have given her group enough time to table their suggestions

“It really is a significantly busy time and I think there needs to be a little longer approach if you’re really wanting to come up with useful suggestions for council to take.”

However, Pateman did say that some of the issues we see in the downtown currently centre around some poor land-use choices from previous councils.

“We’ve seen a large displacement of a lot of our commercial retail and other businesses in the downtown have moved out through land-use decisions of councils before us and I think that’s big-box stores, it’s all of those kinds of things.”

Over 140 people attended the meeting.