“This is by far the worst year ever”: Local business owner opens up on downtown issues 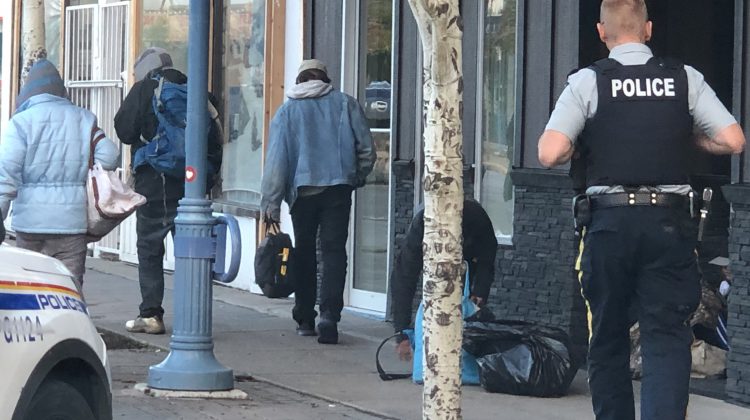 A Prince George RCMP officer ensures a group of individuals vacate from a business in downtown Prince George. (MyPGNow.com staff)

A local business owner believes the city, RCMP and Northern Health could be doing more to assist the homeless population living downtown.

Jesse Cody owns and operates a delivery company called Red Spade Enterprises that drops off packages to the downtown core on a frequent basis.

Cody believes the city should utilize some of its vacant properties to better assist the homeless.

“There’s empty lots downtown where the city staff, bylaw officers and the RCMP could allow people that are sleeping on the streets to stay during the day in a safe zone where they are not going to be kicked out every single day.”

“There are empty buildings downtown, there is one along 1st Avenue and Queensway that’s for sale right now where there are a bunch of empty lots with large spaces that have heating sources, bathrooms and shelters.”

He adds the city’s most vulnerable are also at their tipping point as they often get kicked out of their place on the street multiple times a day.

.@mypgnow with a shot of the full house at @CityofPG council chambers for downtown social issues meeting #CityofPG pic.twitter.com/oa2DNY9BB3

However, Cody is quick to point out that the situation is so bad, his employees literally flip a coin every day to see who will deliver packages downtown.

“Our vehicle got stolen a couple of weeks ago after we put some winter tires on it. The vehicle was locked up in front of their business on Queensway Street and it got stolen on the weekend, I then got a call from the RCMP to pick up my vehicle, they only got a couple of blocks away but I had to put a new ignition in it.”

People are lined up to the door for tonight’s meeting on downtown and issues in #CityofPG @CityofPG pic.twitter.com/Ro3jaNr1wu

The situation has even trickled into his personal life where he encountered a pair of incidents while by himself and with his kids, with one of them occurring at a convenience store on 20th Avenue.

“I took my kids to White Spot downtown and in their parking lot I got harassed by some people and we had people looking into our vehicle so I had to shoe them away. After dinner, we decided to head home and had a little bit of a headache so I went to the 7-Eleven to get Advil, I pulled into the parking lot, saw what was going on and diverted.”

“I eventually went back (to 7-Eleven) on my own and it was very obvious that someone was out in front selling drugs and people were coming and going through the window, passing money and getting a bag. It was pretty obvious what was going on.”

Prince George RCMP Superintendent Shaun Wright later commented after Cody spoke and relayed that the 20th Avenue location is one of the detachment’s top 10 most-frequented locations.