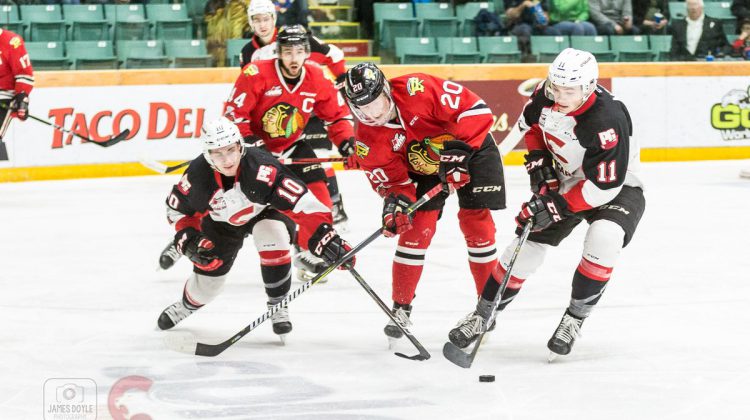 It’s only December and Seth Jarvis looks like he’s ready to hear his name called at the 2020 NHL Draft in Montreal.

The 17-year-old from Winnipeg, Manitoba led the way for the Portland Winterhawks on Tuesday night in a 3-0 victory over the Prince George Cougars in front of 1,804 fans at CN Centre.

Jarvis recorded a goal and two assists for the Winterhawks and was also the game’s first star.

He caught up with MyPGNow.com and discussed the big effort from his entire line, which included New York Islanders prospect Reece Newkirk and Jake Gricius.

“We all bought into the same game plan, playing fast, playing a puck possession game and it paid off in the end.”

“It’s a really cool feeling when we’re all in sync like that where you feel you can’t make a wrong play so it’s really fun.”

Newkirk opened the scoring at 12:21 of the first period cashing in on a nice feed from Jarvis, beating a sprawled out Taylor Gauthier for a 1-0 after 20 minutes.

Portland’s top unit doubled the lead on the man-advantage courtesy of Jarvis who zipped home a feed from captain John Ludvig.

The Winterhawks iced the game early in the third period where it was Gricius’ turn to get rewarded by taking a feed from Jarvis giving the visitors a commanding 3-0 lead.

In total, Gricius, Newkirk and Jarvis put up a combined seven points on a Cougars team that only generated 23 shots on Portland goaltender Joel Hofer who was named to Canada’s World Junior Selection camp on Monday.

Newkirk adds even though Hofer wasn’t the busiest, his contribution to the 17-6-1-2 Winterhawks hasn’t flown under the radar.

“He’s elite. He’s the best goalie in the league right now and I think it is a no brainer that he should make Team Canada that guy steals games for us and we rely on him every game and he competes for us.”

Jarvis on the other hand, is a “B” rated skater among NHL Central Scouting, which carries a second or third round grade.

“It’s really cool, my teammates have supported me a lot and it’s all really fun and is something that I have dreamed of. Talking to these teams and getting some recognition is pretty cool.”

For the Cougars, the loss drops them to 6-18-0-2 on the season, thirteen points back of the Tri-City Americans for the final wild-card spot in the Western Conference.

Defenseman Ryan Schoettler believes if the team’s fortunes want to change against a team like Portland, they will need to role up their sleeves in the dirty areas.

“We’ve got to take the body more, we passed up on a lot of hits tonight and that’s a big thing with these fast and skilled teams as they don’t like to be hit. We just have to keep throwing pucks on net and get in front of them, eventually one of those rebounds we’ll be sitting there and we’ll tap it in.”

Tuesday’s game was the first of four consecutive meetings between the two teams with the rematch set for tonight (Wednesday) at 7:00 pm from CN Centre along with a pair of battles Friday and Saturday from the Veterans Coliseum in Portland.

Schoettler touched on how the approach differs when your playing the same team for about a week straight.

“It’s almost like a little playoff series against them, this is different as we normally don’t ever have that in our schedule playing a team four times in a row but now we can focus on all we have on them for the next three games.”

Gauthier stopped 30 shots in the loss.

The game also marked the return of former Cats goalie Isaiah DiLaura to PG as a member of the visitors.

The 19-year-old American was acquired in a trade early in the season and is serving a Hofer’s backup playing in only three games.