Cougars let Winterhawks off the hook, fall in OT 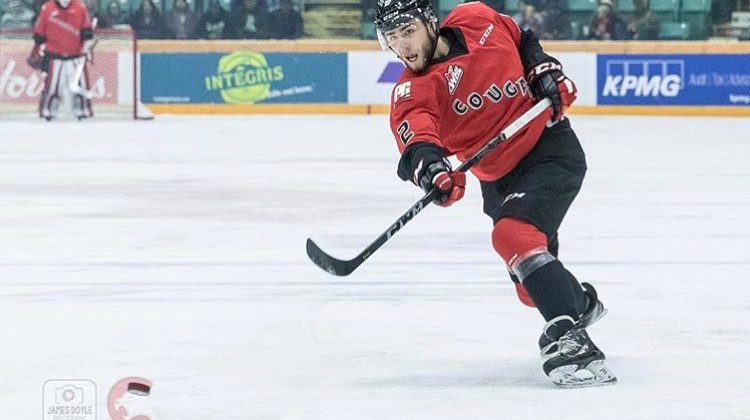 For about 53 minutes the Prince George Cougars had the Portland Winterhawks on the ropes.

Unfortunately, if you want your opponent to stay down, the knockout blow has to be delivered.

The Winterhawks stormed back from a 3-1 third period deficit to edge the Cats 5-4 in overtime in front of 1,785 fans at CN Centre.

“Penalties killed us, I think we killed off a lot in the first two periods but I think there are a lot of positives we just have to learn from our mistakes,” said Nikita Krivokrasov, Cougars forward.

Josh Maser got PG on the right track at 14:48 mark of the first period rifling one past Portland goaltender Joel Hofer on the power-play for a 1-0 lead after 20 minutes.

The Winterhawks continued to sleep-walk through the back-half of the double-header as defenceman Nick Cicek left the puck deep in the defensive zone to deliver a check, only to see Krivokrasov pounce on it and beat a sprawled out Hofer to extend the lead.

Robbie Fromm-Delorme ignited the Winterhawks offense with a power-play goal of their own cutting the deficit to 2-1 at the conclusion of the second period.

The tide began to change at the 7:37 mark of the third period when Reid Perepeluk took a kneeing minor after colliding with a Portland player, giving them another power-play.

It only took the Winterhawks 18 seconds to cash in as Seth Jarvis capitalized on a Jayden Dureau pass beating Cougars netminder Taylor Gauthier who had a solid outing in defeat allowing five goals on 36 shots.

Johnny Ludvig and Reece Newkirk struck about 90 seconds apart later in the frame to finally put Portland in the driver’s seat.

Vladislav Mikhalchuk evened the score at four with 56 seconds to go and Gauthier pulled for an extra attacker sending the game into overtime.

Ludvig led the way offensively for Portland with a goal and two helpers.

The Florida Panthers prospect caught up with MyPGNow after the game and said the team stuck with the game plan and never gave up.

“I didn’t think we played a bad game, I thought we played a good game tonight but they came out with a push and but we were able to handle that and it allowed us to come out on top.”

After several near misses, the Winterhawks ended the game 3-for-5 on the power-play.

“We were getting a lot of chances and we knew they were going to go in at some point and we had a big push at the end there,” added Ludvig.

Fromm Delorme also had a goal and two assists, he was the guy who set up Hanus on the overtime winner.

“I think we have really good overtime players. Obviously I came off the wall with the puck and I saw Clay driving wide and I was able to get it to him and he got off a really good shot,” added Fromm-Delorme.

“The Cougars are a really hard battling team and you can’t get frustrated against a team like that you just have to battle hard and make plays the space will open up, we did that and we came out with the win.”

Prince George now travels to the Rose City to cap off the four-game mini-series against the Winterhawks Saturday and Sunday from the Veterans Memorial Coliseum.

Krivokrasov believes the same type of effort plus a little more focus could swing things in the Cougars favour.

The Cougars are 12 points back of the Tri-City Americans for the final wild card spot in the Western Conference.